Should CM Wilhoite abstain from voting on the new convention center?

Based on what I'm hearing from last night's Antioch community meeting, District 29 CM Vivian Wilhoite is going to have some explaining to do to constituents if she votes in favor of the largest capital project in Nashville history: the Music City Center. There seems to be remarkable outspoken opposition to the Mayor's proposal in Antioch. 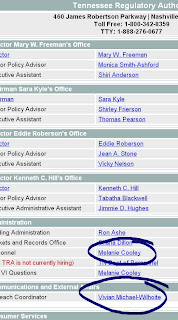 However, given CM Wilhoite's employment ties at the Tennessee Regulatory Authority to the wife a major Music City Center lobbyist, I'm not so sure that she can vote at all on the measure. Concerned citizen Mike Peden pointed out to me that Ms. Wilhoite has a somewhat beholden relationship to lobbyist Dave Cooley's wife, Melanie Cooley, who is the advisory head of Personnel. Mike described what he found out yesterday in a phone call to the state:

Given these circumstances, I don't see how CM Wilhoite can vote on the Music City Center without appearing to lapse into a conflict of interest, especially if she votes for the MCC. Her primary source of income depends in part on the feedback of Melanie Cooley who stands to gain financially from a successful lobbying campaign for MCC by her husband.