Did the Tennessean's education reporter tweet her meltdown at a teacher?

Journalistic professionalism ain't what it used to be: 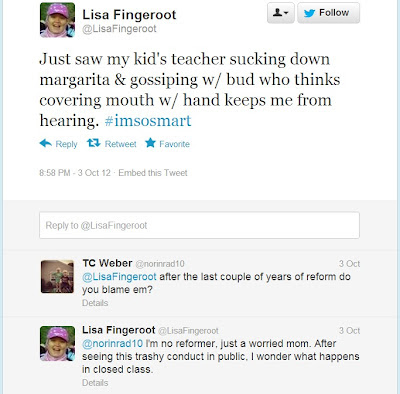 In another tweet, reporter Fingeroot called the teacher and her companion "rednecks", and she seemed to suggest that the teacher was the cause of her son's absences.

Rather than projecting hostilities about after-work margaritas on Twitter, why not play nice while doing some sort of hard-hitting, investigative exposé that substantiates her claims that her son's absences are due to how his class is being taught?
Posted by S-townMike at 10/05/2012 12:20:00 PM