Sometimes late is not any better than never: now that Greyhound signed a lease to relocate, CM Erica Gilmore schedules a public meeting

Since the Convention Center Authority's bid to sneak the Downtown Greyhound bus terminal to Charlotte Avenue and 11th Avenue North on the Q.T., the District council member, Erica Gilmore, has issued ever more formal media advisories. Today's is consistent with CM Gilmore's recent pattern of communication: 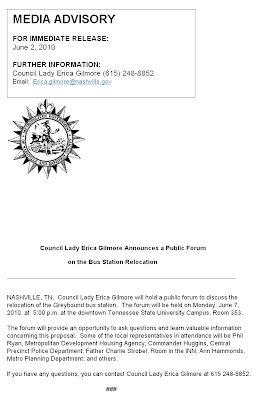 The release calls the relocation a "proposal." This is misleading if we are to believe what we were told at the Hope Gardens-sponsored community meeting last week: that Greyhound has already signed a lease. The Greyhound move to the old Hansen Chrysler dealership is a done deal. In fact renovations have already started and parking stripes have already been painted.

The first question that needs to be asked is why are the Metro media flacks who crafted this advisory for CM Gilmore spinning and distorting this as a "proposal" when the parties have all signed on the dotted line? I cannot see our neighborhoods having any influence at all now that the deal is contractual.

Therefore, the ostensible purpose of next Monday's meeting is to try and influence community opinions that seem to be weighing against the relocation and to try to soften the shock over the growing perception that CM Gilmore knew about the terminal agreement and chose not inform her constituents until reporters discovered the story. If the purpose of the meeting is to allow public feedback and influence, the timing of the meeting could not be worse. It should have happened before the lease was signed.

As it is, it would be more honest not to have another public meeting about Charlotte and 11th at all outside of those to which Greyhound has agreed in order to work directly with neighborhood associations to keep crime and blight in check.

After missing last week's meeting, MDHA is sending their executive (the beleaguered housing agency still controls business relocations in the convention center project). Police Commander Huggins was kind enough to attend last week's meeting, and his input will be welcome on Monday. The Metro planner still needs to produce a valid explanation for how the Downtown Code allows special relocation privileges for the Convention Center Authority without any input from community "stake-holders" affected by cynical Courthouse power moves.

However, it is a mystery to me why the Director of Room in the Inn is attending, other than the offices are near the Music City Center site, too, and hence, subject to relocation. One rumor I heard--denied by an CCA spokesperson last week--had either or both the Campus for Human Development and the Men's Rescue Mission being considered for relocation to Jefferson Street near Germantown. Other than considering other possible moves within the urban core what will Father Strobel be there to do Monday? Vouch for the way Greyhound terminal enhanced the quality of life on the block?

Finally, note that the Mayor's Office has still not committed to attend (they were invited to last week's Hope Gardens event), but maybe someone there wonders as I do where they will be allowed to park at the Downtown TSU campus. I have no idea where I will be able to park or if I need to load my pockets full of change to feed meters or parking attendants. That has me wondering why the powers-that-be did not schedule this meeting in a church or a neighborhood center with plenty of parking that people do not have to vet before they go. Why did Metro leaders not provide a more user-friendly venue for this public meeting?

Probably because it will not amount to a hill of beans anyway.

CM Gilmore needs to work more diligently with the North End neighborhoods to come up with solutions for tightening the Downtown Code so that neighborhoods receive early warning and proper notice from a transparent government in future planning. Otherwise, Monday's meeting looks like window dressing to me.
Posted by S-townMike at 6/02/2010 11:10:00 PM