In the interest of full disclosure

Several years ago Hope Gardens association president Jason Powell contacted North End community leaders to bring together "champions" whom he said could give life to a plan for a new ballpark in the North Capitol area. The "champions" never really materialized as a bona fide grassroots movement here. The "champions'" Facebook page lay dormant for 2 years before cranking up again with the Mayor's formal announcement several weeks ago. Now, as a prominent Democrat and State Representative from south Davidson County's 53rd District (but still a cheerleader without a grassroots ballpark movement), he celebrates news of the Mayor's Sulphur Dell announcement: 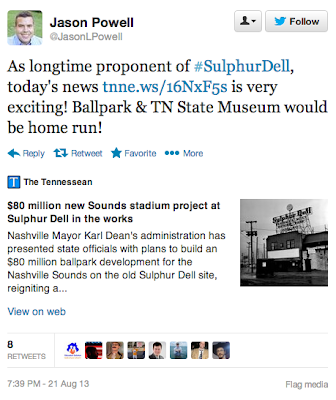 It may very well be a big fly for local property owners, especially since the news media is passing around projections that land values here will soar:

The impact a new ballpark could have on that area will be similar... [to] the ripple effect Music City Center had on SoBro, where property values have in some cases tripled in recent years.

If the project becomes official, look for property values to initially jump around 15 percent, [real estate broker Grant] Hammond said. Once construction is underway, Hammond expects prices to climb again, about 25 percent higher than now. Once completed and the buzz of the new stadium is at its peak, Hammond anticipates values will be up about 50 percent from today.

Hammond, who was planning on selling one of his investment properties in Germantown next spring, said he now plans to hold on to the condo until the first season of baseball in the new stadium.

“It could be a remarkable little ride for Germantown,” Hammond said.

With Germantown already flourishing, the biggest impact might be most noticeable in the area’s other neighborhoods.

“Hope Gardens and Buena Vista are seriously underdeveloped,” Hammond said. “That all turns around the moment they open the stadium doors. Those neighborhoods need some sort of big development to be the spark.”

After looking at the Metro property records, I can certainly understand why State Representative Jason Powell is excited about a new ballpark; he co-owns 3 properties located in Hope Gardens and 1 located at Buena Vista Heights/Jones Buena Vista. These are both neighborhoods that are identified as the biggest gainers from a new ballpark. Hope Gardens itself lies blocks away. String half-a-dozen Prince Fielder home runs together end-to-end, and Hope Gardens is that close to Sulphur Dell.

All of us who own property close to a new ballpark stand to benefit financially from a rise in property values a new development would bring. So, I do not blame the Democrat for acquiring investment properties over the last 4 years with hopes that their values will rise even though he does not dwell here any more. However, those of us who continue to live here have to worry about more than a return on real estate. We have to worry about protecting our families' quality of life from malignant growth and shortsighted planning. We have to demand smart, managed growth and planning for sustainability and respect for community character.

I'll say it again: I acknowledge Jason Powell's right to buy up as many properties as he wants and maximize their value to his heart's content. It is America, after all. I also acknowledge his right as a state legislator to maximize his relationship with the coattails of Mayor Karl Dean, who admittedly is the Tennessee Democratic Party's great red-state hope to beat a Republican somewhere sometime in the future. Bucking Karl Dean on a ballpark would not help a guy still fresh in his first state office (after running and losing here in our North Nashville district) and still flush with political aspirations.

But the quaintly walkable tableau that Jason Powell illustrated 3 years ago--as a spokesperson from my community to a Tennessean audience--now rings hollow, given that he presently lives close to the Nashville Zoo and leaves his real estate next to Sulphur Dell:


The neighborhoods, businesses and developments around Sulphur Dell are vibrant, supportive of a new ball park and poised for further growth. Downtown work­ers and residents, in addition to the surrounding neighborhoods of Germantown, Buena Vista, Salemtown and Hope Gardens and condos in the Sulphur Dell area, have the popula­tion to anchor attendance at games.

The location is already well-suited for professional baseball. Imagine grabbing a meal in Ger­mantown or at the Farmers Market, then relaxing at Bicentennial Mall before strolling to the ballpark to catch a game ....

If you build it we will stroll. Well, some of us will stroll. Rep. Powell will not because he no longer lives here. He owns property here. He will be driving to Sounds games at Sulphur Dell.

That is a proposition different than what our neighborhoods will actually face with the onslaught of traffic, the absence of transit plans, the ulterior motives of developers and the shifting goalposts of the community planning process along with the politicians who debase it. At least he has the certainty of greater property value without the challenges of living next to a large entertainment venue. Even so, he also should disclose the fact of his holdings whenever he uses the visibility of his office to tout the new Sulphur Dell.

Whether or not a Sulphur Dell ballpark might be a home run for all of us who live around it is still up in the air. For State Representative Powell it would appear to be more of a walk-off home run.


UPDATE: I guess none of us should be surprised that on opening day of the ballpark (April 17, 2015), Jason Powell is gushing about First Tennessee Park.


I think back to those heady days of "Friends of Sulphur Dell" when he was gathering a few friendly neighborhood representatives (ignoring those with questions) and touting his movement as "grassroots," never characterizing it as his own. I suppose it is a lesson in the idea that winners write history, but now Mr. Powell is claiming "the push" for himself. Maybe we shouldn't be surprised by this either: 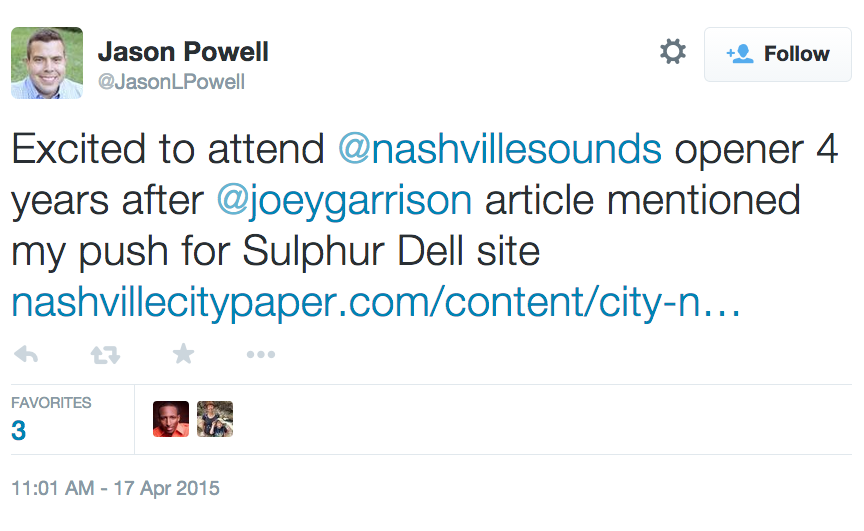 Elected officials are known for shameless self-promotion, but in this case Mr. Powell should be more honest and concede that he had very little to do with the building of the ballpark. In 2013, it became obvious to all that the real puppet master was Karl Dean. Everything else was pure theater.
Posted by S-townMike at 9/05/2013 11:50:00 PM