One month ago today Michael Brown was shot dead by a Ferguson, Missouri police officer. It was an infamous event that ignited anger and concern around the nation. There were mass protests around the country, especially after militarized St. Louis County police cracked own on organized local demonstrations. Social media coverage blew up and forced city politicians hundreds of miles from St. Louis to deal with the fallout. The federal government is currently investigating how police handled the shooting and the social protests with the possibility that any militarized police force that has used military weaponry against protesters could be forced to return the grants.

In late August local congregational leaders in Nashville sponsored a standing-room-only town hall meeting in North Nashville marked by unease, consternation and qualified support for Nashville's police department, their double standard toward non-white communities and their own military arsenal gained through federal government grants. Police officers were prompted to account for the ways they have used military weaponry in service of the public.

That meeting was attended by the candidates who have announced their desire to take over the Mayor's Office next year. One would think that after Ferguson shook the country and after the shock waves were felt in Nashville that this all-white slate of candidates would be articulating some kind of policy options for checking militarized policing in Nashville. Maybe I have not looked in the right places, but I cannot tell that they have proposed any changes to the Nashville status quo. Maybe they believe the don't need the votes.

And I looked at their websites. This is what I found there as of today.

School reformer Jeremy Kane is otherwise a blank slate. He says nothing about his policy ideas on the issues, preferring "to hear" your ideas for Nashville on his website. He has an air-brushed PR video on the main page that basically retreads Karl Dean's three-headed campaign hellhound: education, law enforcement and economic development. He adds reformer jargon to public education like "collaboration," which is typically code for "privatization" (subsidizing private enterprise with Metro revenue that would otherwise be used for public programs). I cannot find any evidence that candidate Kane has said a thing about policing Ferguson or the militarization of police forces. Does he believe that charter schools are the answer? He attended the August 21 town hall meeting on Jefferson Street, but his only response to that was to thank the organizers of the event on Twitter.

Megan Barry has gone farther than Jeremy Kane in giving some detail to policy questions on her website, but those details do not seem to be updated in the last month with all of the unpleasantness arising from the Michael Brown shooting in Ferguson. In her public safety meditation, she vaguely refers to the justice system "treating everyone the same". She makes no specific reference to racial inequality when she fleshes out what she means by that. She says nothing about curbing the excesses of police militarism and brutality even as she touts her council votes in support of increasing the number of cops on the streets, which is only a good thing if cops are treating everyone even-handedly (as we heard at last month's town hall, they are not). 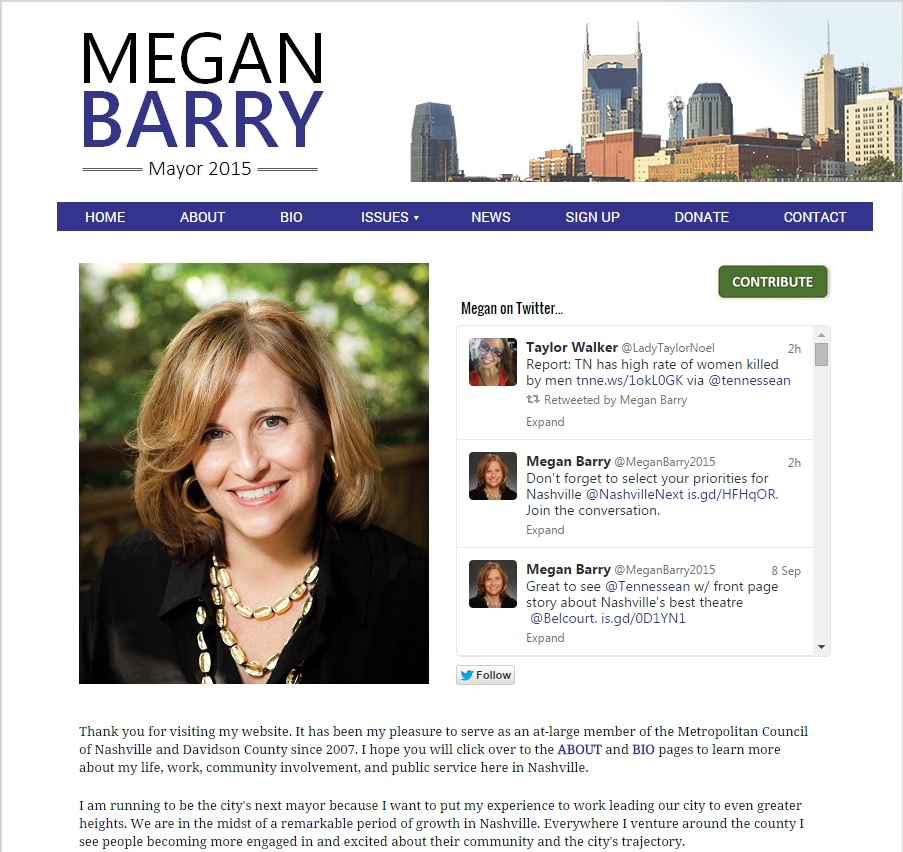 Candidate Barry offers no indication that she supports citizen advisory committees to watchdog the actions of police armored to the hilt with weapons of war. And I have already pointed out that she seemed to deny that the injustices of Ferguson are likely to happen in Nashville based on nothing but a metropolitan structure of government. As if individuals who work for Metro government cannot make bad decisions.

For his part, Charles Robert Bone has been quieter than the rest on the question of race, police brutality, and military toys for cops. Mr. Bone seems satisfied in his website comments with the direction Nashville has taken on public safety, and so I am growing to expect little illumination from him on how he would address policing problems that affect North Nashville more than other parts of the city.

So, we have three candidates for the county executive seat, none of whom have committed any public promises that they will order policies that protect communities from militarized police. A month after Michael Brown was shot dead (according to witnesses with his hands in the air), weeks after the protests shook our country and North Nashville held a town hall meeting, how can Jeremy Kane, Megan Barry, and Charles Bone remain unaccountably quiet on what they might do to forestall the repercussions of these troubling times? How can they vie for the most powerful seat in Nashville without any clear ideas for preventing Ferguson from happening in Davidson County?
Posted by S-townMike at 9/09/2014 05:46:00 PM