Occupy Wall Street emerging in communities across the nation 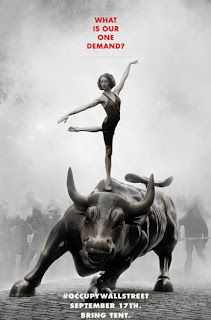 We may be seeing popular blowback against market malfeasance of recent past, against government's continued coddling of the financial industry; or we could be seeing the extension of protests that have have been occurring internationally since the "Arab Spring" revolutions swept across North Africa and the Mediterranean coast.

The Occupy Wall Street protests began on September 17 with fits and starts in the New York City neighborhood at Liberty Plaza. They marched around the streets of the Financial District among hapless police who according to at least one newspaper were unprepared for small scale and fluid action of the group. For their part, the US protesters emphasize representing the 99% of Americans who have no control over the financial assets here. They criticize corporate bailouts and ridicule the tea party movement for being a tool of conservatives and corporations.

The protests galvanized and expanded a few days ago (as many do) when police assaulted and arrested nonviolent protesters. Undaunted, they hold general assemblies, stock mobile libraries, coordinate food distribution and even provide medical aid in public parks. Jailed protesters have held teach-ins on IMF and reclaiming the public square. Occupy groups have sprung up in cities across the country, including a rag-tag group in Chicago hanging on against at the Federal Reserve.  Both Memphis and Nashville now have Occupy groups. We will see how long and how effectively these protests are coordinated, but leaders pledge to continue into October.

Here a couple of well-produced videos representing two groups of protesters at opposite ends of the country:


UPDATE: a media critic in New York observes via Twitter:


What impresses me about media coverage of #occupywallstreet is how inattentive it is to a sleeping factor: the social media ignition moment .... when 1,000 people swells to 10,000 and 100,000 in two days because of horizontal sharing.

Perhaps that is because the news media is generally too busy advertising their own items and pitching their own perspective (if not ignoring for some other banality) to pay attention to social media as an organizing tool.

UPDATE: So far, I'm less than impressed with Occupy Nashville. They seem more focused on staying connected with Occupy groups in other cities than on using social media to organize here. Social movements always require more boots-on-the-ground work than simply tweeting and facebooking messages. If they have a strategy outside of relinking news from outside sources I cannot make heads or tails of it. I can get the same information from a multitude of other feeds. Why simply replicate what every other Occupy social media site is doing? At this rate I don't expect Occupy Nashville to mobilize and I'll likely be unfollowing the media soon myself.

UPDATE: Rolling Stone writer Matt Taibbi talks with Keith Olbermann about the "organic" popular movement and the possible reform affects it could have on Wall Street. They also discuss the bias in the news media to cover conservative movements and to ignore progressive ones: