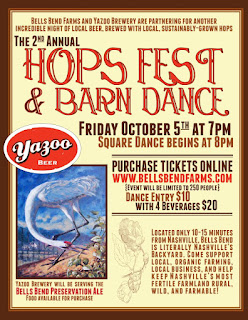 I have steadfastly followed the prospects of the residents of Bells Bend for several years now. Including news last year that Nashville Yazoo micro-brewery had developed a partnership with local organic farmers to bring hops to local beer production.

Of course, what spurred my interest in Bells Bend long before that was the cause to save the farmland from May Town developers who wanted to flip it into a second downtown without regard for community planning or the wishes of Scottsboro-Bell Bend who would have been displaced by developers's sprawl. The developers put a full court press on North Nashville to try and convince us that the trickle-down jobs that would result would benefit us. Many of us here did not buy the pitch. West Nashvillians who would have been inundated by extra traffic resulting from three new state-built bridges across the Cumberland River also had something to say about the matter. And many, many other Nashvillians were sympathetic because they knew it could have just as easily been them facing bulldozers and unsmart growth. Opponents of May Town grew and galvanized to support the cause.

Now a whole lot of people beyond concerned neighborhood leaders are celebrating the partnership between Yazoo and Bells Bend. Check out Nashville Scene on the bandwagon:


In this autumn's batch of Yazoo Brewing Co.'s pale ale, one flavorful adjective will trump the rest: local. Because the bright-citrus-and-cilantro-scented hints of fresh-cut grass on the head of the limited edition Bells Bend Preservation Ale come courtesy of hops grown in the fertile fields of Davidson County ....

In recent years, the rural area, minutes from downtown, has been the target of development efforts, such as the proposed May Town project. Residents objected to the mixed-use development, fearing it would flood their quiet country roads with traffic and end life as they knew it in the bucolic acres near Scottsboro. They organized, branding their cause with the lyrical logo of whooping cranes, in honor of two endangered birds that took up residence in a Bells Bend field.

The May Town controversy subsided when city officials denied approval for the project, but the whooping crane remains a symbol of the community's commitment to preserving its open spaces and agriculture. This fall, the bird is also the symbol of Yazoo's dry-hopped beer.

The May Town drama did not just subside because of city officials who did not go along. It also ground to a halt because of the hard work and organizing of neighborhoods across Nashville who wrote letters, cajoled council members and commissioners, showed up for every public meeting, and held their own meetings to strategize against the public relations campaign conducted by wealthy developers, pitch men, and lawyers. I tried to document as much of the story as possible here on Enclave because I do not believe it should be forgotten.

I'll continue to watch the annual celebrations of Bells Bend--which now has a sustainable, self-perpetuating relationship with a successful local entrepreneur--content in the knowledge that I joined something larger than myself, a throng of other leaders whose conviction to save rural Bells Bend from urban sprawl made these days possible. I am thankful for that.


UPDATE: Upon further reflection, I remembered how proponents of protecting Bells Bend (agri)culture were labelled "NIMBY" ("Not In My Back Yard") and cast as negative for opposing May Town. It was always clear to me that the neighborhood leaders taking on the developers were positive, progressive actors in the story and that they were "QIMBY" ("Quality In My Back Yard"). Quality is exactly what they got in the organic production of hops for Yazoo to craft a new line of ale.
Posted by S-townMike at 9/27/2012 12:55:00 AM