Longtime readers of this blog know that preserving Fehr school for public, educational purposes has been a goal of mine for years now, one that I have consistently advocated over and over again. 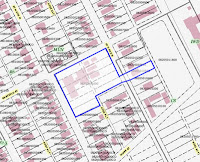 I'm pleased to report that Metro Council approved CM Erica Gilmore's bill that would protect the endangered building from demolition or radical alteration of the building without approval of the Historic Zoning Commission based on recognized preservation standards, with one exception. Here is the meat of the ordinance:

Title 17 of the Code of The Metropolitan Government of Nashville and Davidson County, is hereby amended by changing the Official Zoning Map...as follows:

By applying a Historic Landmark Overlay to the Fehr Elementary School property located at 1622 Fifth Avenue North (2.21 acres), and the Warner House property located at 1612 Fourth Avenue North (0.2 acres) being Property Parcel Nos. 060 and105 as designated on Map 082-05 of the Official Property Identification Maps of The Metropolitan Government of Nashville and Davidson County, all of which is described by lines, words and figures on the attached sketch, which is attached to and made a part of this ordinance as though copied herein.

An exception is being granted to allow the Metro Action Commission, which has dug in its heels against this preservation of this Civil Rights era jewel for months, insisting that it be allowed to make any changes to the building that the federal government might require, even though there were no examples ever given to the neighborhood of what those requirements might be. And given what I was told during a phone call last spring from CM Gilmore, the Metro Action Director seems to have flip-flopped after dropping the exemption requirement. Section 2 of the bill contains now includes their exemption:

Be it further enacted, that any restrictions on the alteration of structures created by the designation of the Fehr Elementary School and Warner House as Historic Landmarks shall not prevent the Metropolitan Action Commission from making necessary alterations required by the federal government to the structures located on the properties identified in this legislation or require the Metropolitan Action Commission to seek the approval of the Historic Zoning Commission for such alterations

.
As long as the term "necessary" is not defined loosely or broadly, then MAC's exception might not present problems. Although, MAC is also exempted from any public process where their plans would be made transparent in the approval process before the HZC. In principle, I do not believe that exempting a Metro department from a rigorous public process is a wise practice. This will force concerned citizens to stay on top of capital budget requests from MAC and to contact our elected officials in Washington about reviewing any federal requirements MAC claims it has to radically alter this living museum.

It's not a perfect bill (few are), but I suppose it is the best we can get given the preferential option Metro Action leaders seem to be reserving for themselves to the point of halting Salemtown's long-held goals of preserving Fehr. I strongly recommend supporting Erica Gilmore as she does what she can with this ordinance to preserve Fehr based on landmark status standards. Given that Metro Action got exactly what it wanted, there should be no more obstacles to quick and painless passage.
Posted by S-townMike at 9/26/2012 12:00:00 AM