Last February, readers, I told you that the Medical Mart, which Mayor Karl Dean promoted as a vital, job-creating replacement for the Nashville Convention Center and virtual compliment for the new Music City Center, was dead according to Cleveland news sources.

And, just like that, eight months later, Mayor Karl Dean is confirming that the Medical Mart deal is dead, with breathtaking lack of query now from Nashville's media, which breathlessly, seemingly unanimously, promoted Hizzoner's plan for a Medical Mart when its staging meant leveraging approval for the new Music City Center.

As bleated by WPLN and no doubt sponsored by the Mayor's Office:

Nashville Mayor Karl Dean sounds like he’s all but given up on the so-called med mart ....

Dean says the Renaissance Hotel, which is attached to the city-owned convention center, is interested in taking over some of the space. Dean says it’s a desirable piece of property that he’s not worried about sitting vacant long. 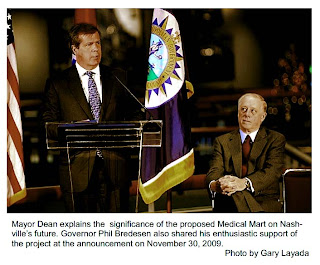 Not quite the optimistic narrative spouted out of the Mayor's Office and the media when the Music City Center was pitched to us. Now Nashville is simply "moving away" from the Medical Mart (even though 8 months ago we were limping toward it) according to the article by Blake Farmer, as if Karl Dean had never made certain promises under the pretense of building Music City Center. Would Music City Center have received quite as much promotional spin if Dean announced that his vision included the Renaissance Hotel shacking up in part of the old convention center? Doubtful.


Supplement: Jamie Hollin sees IQT lurking in the loss of Medical Mart. Given the Mayor's checkered past with IQT, Holins insights might not be far off.
Posted by S-townMike at 10/12/2012 04:16:00 PM