Using social media to get the lights back on

Back in February 2005 I blogged a post on a cobra-head street light in front of my house burning out and the 10-day wait I was subjected to after the Metro bureaucrat at the other end of my phone request for repair drug his feet and rationalized the delay.

Jump forward to the first week of January 2012. I contacted the NES social media manager via Twitter to ask for the most effective way to report 3 sidewalk lampposts--installed several years ago as part of our federal block grant streetscape project--that had burned out. With Metro's confusing website makeover, I felt that going straight to NES was a better solution this time. That person directed me to their online report form.

One of the lampposts had been out for at least two years without any repairs. Two others stopped working late in 2012. I reported all three on January 4, giving locations and a lamppost serial number.

Despite my anticipation that going straight to NES via Twitter would get faster results than in 2005, three weeks passed with no changes to the lights. I tweeted @NESpower again. The person at the receiving end of my tweet replied, "For some reason, the work order was marked complete." They issued another work order.

Another week passed without any repairs and I direct tweeted @NESpower again. The social media specialist said that they were working with NES Customer Service to resolve the problem. Eight more days elapsed without changes, and so I followed up on Twitter again. @NESpower responded last Friday by saying that they tried to repair the lights on Thursday, but had some obstructions that kept them from completing the job. 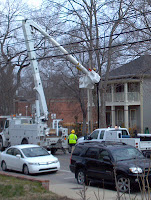 Then on Saturday, the cherry picking truck showed up and replaced all of the the burned out lights that I originally reported on January 4. It took about 5 weeks longer than I hoped it would, but the lampposts are shining brightly once again on my street.

The lesson to be drawn is that the traditional channels for requesting lighting repairs are not any more reliable for me now than they were in 2005. In fact, replacing the lights took longer and a work order was erroneously marked as complete even though repairs were not made. And not having Metro help readily available for neighborhood infrastructure may make leveraging follow-up more difficult. My next option if nothing had been done by this weekend would have been to contact my council member.

Consequently, I would counsel anyone having trouble with NES customer service to be sure to use social media to interact with a company representative directly about follow-up.
Posted by S-townMike at 2/17/2013 10:56:00 PM