With Channel 4's investigation of Metro Water Services and the dump of chemicals they are planning near my neighborhood, I went back to look over the aerial maps of the 2010 flood on the Metro government website. I spent hours outside in May 2010 documenting the Cumberland River flood as it happened, especially around the water treatment plant. I remember seeing not just black liquids in the river water that looked like fuel oil, but also some kind of heavy reddish-brown substance rolling just under the surface of the flood waters inundating Morgan Park (which is less than a block from the site where Metro Water wants to bury chemical-laced debris in a new landfill).

Yesterday I went back to the Metro maps and took a screenshot of the planned landfill site at the treatment plant as it looked in May 2010.

Most of the old incinerator site seems to sit at a higher elevation than the new addition, the biosolids facility (right side of the screen shot), which was inundated and damaged by the river in 2010. There is a spot at the south end of the plot where the flood overtopped the road. But if you also look closely at other spots throughout the old incinerator site, you can see water pushed up to the surface, either through storm drains or the through the ground itself.

What troubles me most about this photo is the prospect that, with a new chemcial landfill buried in the basement of the incinerator, future floods will pass through the PCBs, lead and arsenic to get back up to the surface. What are the odds that the "protective cap" said to be placed on top will keep those chemicals at bay rather than brought to the surface or pushed out only to expose neighborhoods?

Look at another screenshot a little farther south of the incinerator site (the photo was taken several hours before the flood waters crested, because when it did crest in the evening the streets near Morgan Park were flooded well above the pooling seen in the photos). 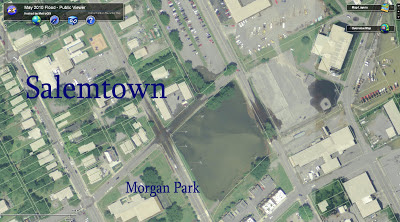 The black liquid (in contrast to the yellowish-green floodwater) I mentioned earlier is clearly coming up to the surface of a parking lot. It is also pooling on 3rd Av North at Morgan Park. Note also that it is also flowing across approximately half of the park basin itself. The floodwaters are clearly pushing something besides water into the neighborhood. It might help if we knew where that stuff was coming from.

If Metro dumps its leftover carcinogens at the old incinerator site 300 yards from the Cumberland River, it seems obvious to me that those chemicals will also be subject to the pressure of any future floods of the river. If the 2010 event could push whatever that black chemical was into Morgan Park, it is fair to assume that it will wash and push chemicals left on incinerator debris into the community as well. And those chemicals present demonstrated risk factors for cancer.

This landfill issue is a question of protecting public health in North Nashville. Why even take a chance on doubling any future catastrophe of unsuspecting neighbors by storing contaminated debris in a basement on floodplain?
Posted by S-townMike at 5/24/2013 12:26:00 PM