It's all-hands-on-deck for the Mayor's "Neighborhood Challenge" today, but how "environmentally conscious" does Karl Dean really want us to be?

With Mayor Karl Dean waltzing his big-ticket Metro budget items past the passive Metro Council once again, today he turns to the perennial afterthought in his 6-year administration: neighborhoods.


The official invitation to the Mayors Neighborhood Challenge Kickoff Event promises prizes for the best performance by volunteers:


How "green, healthy and involved" we are in the neighborhoods? I do not know whether my neighborhood association is participating in this, but it would be ironic if they are since the Dean administration is about to finish a landfill of carcinogens and fuel contaminants on our doorstep. Yet, the Mayor's Challenge is promoted as an event to make us more "environmentally conscious",  even as the Mayor ignores calls to stop polluting the environment around Metro Water Services outside Salemtown. My message to Karl Dean: "I am sufficiently environmentally conscious, Mr. Mayor, and I expect you to end the dumping here in North Nashville and haul the debris out."

In my opinion the Mayor wants us to focus on volunteering to pick up some trash or to report codes-violating neighbors (through the NOTICE program) in order to give us false hope and to ignore real environmental problems like Metro Water burying toxic debris 300 yards from the Cumberland River. That landfill happened without any feedback from the community. We cannot even report Metro Water to Codes through the NOTICE program, because Codes approved the dump without taking the community into consideration. In that context, reporting neighbors to Codes for their violations looks like small-potatoes and divide-and-conquer. How can dumping old tires or garbage on private vacant lots be worse than burying heavy metals below the water table on public land?

Mayor Dean has been banging the drum of about how we should be living our personal lives (his enduring focus on us getting healthy is a prime example), and ignoring our reservations about his policies, programs, and practices inconsistent with healthy living. But wait. Today he is buying more of our voluntarism with promises of prizes for the neighborhood that shows out the best. How voluntary can it be if people are prompted by prizes? Can healthy living be sustained on the promise of swag and block parties?

Many local organizations inside and outside Metro government, beyond neighborhood groups, are responding to the Mayor's call for all-hands-on-deck. The Neighborhoods Resource Center, which claims to "organize residents to obtain more power" (even when it seems to run silent on Metro polices that discourage popular power) is a "tool" in the Mayor's "kit". I am not kidding: the Mayor lists organizations, including the NRC in his "toolkit". Other organizations are promoting the Mayor through social media: 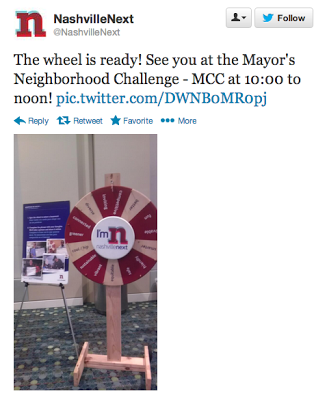 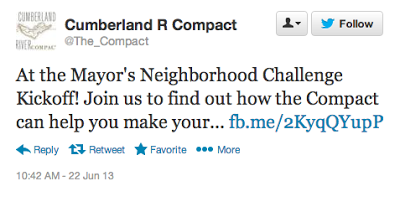 When organizations choose to stand with a powerful municipal executive, they will not stand with communities when the latter are casualties of municipal policies that are anything but "green, healthy and involved in the neighborhoods". No wonder Hizzoner needs to give away prizes in order to entice average citizens to this event. 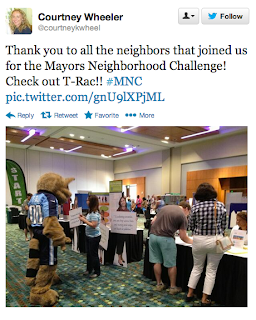