The reason that a possible deal between Metro, the Sounds, and the state for a new Sulphur Dell ballpark was announced was to clear the way for this week's announcement of a new amphitheater and park at the former thermal site (effectively bumping the ballpark). I cannot prove that claim is true. But I would bet six ways to Sunday that it is.

Whether the Sounds were willing to make the move to North Capitol or whether Hizzoner simply played his hand out until the Sounds felt forced to acquiesce, we may never know. We do know that a lot of old Nashville wealth is behind flipping the thermal site to open space for outdoor orchestra concerts.

The Mayor will pay for this high-society playground in part by flipping flood relief funds to pay for a wall and a "promenade":

The mayor put the estimated cost of the project at between $30 and $40 million, but stressed that his administration is not seeking new funds. The Metro Council has approved about $35 million for riverfront redevelopment on the west bank as part of three previous capital spending plans. And last month, the Metropolitan Development and Housing Agency approved the reallocation of $7.1 million in federal flood relief. The former flood aid will be put toward the construction of the flood wall along the promenade.

So, the rest of Nashville is no longer in need of federal flood damage relief? We cannot find any other projects around Nashville that might help the everyday lives of average people? What about these folks in Madison or Bordeaux? Or how about this guy? 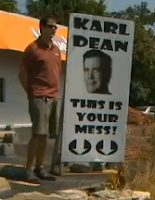 "I've been battling this for two years at least. I feel like their (the city's) negligence caused this whole thing to happen," explained John Watts of Value Vet in Nashville.

The problem is a drainage ditch along the side of Watt's property along Gallatin Road. Every time it rains, he said the water isn't draining properly and causing the edge of his parking lot to slowly erode. Recently the problem got so bad his retaining wall collapsed.

In an effort to get the city to pay attention to the issue John had a sign made at a local print shop that reads "Mayor Dean, This is your mess!" with a black and white photo of Mayor Karl Dean in the center of the sign.

"I get lots of support from it, people come by and honk and are like ‘yay' they know the problem," John added.

The Mayor refuses to acknowledge the problem. He's got a promenade to erect.

However, there might be a problem for North Nashville neighborhoods if all of the federal flood funds are going to suit a stylish amphitheater. Sulphur Dell is an area historically prone to catastrophic floods. Even with the Army Corps of Engineers taking measures to mitigate flood damage in Nashville during the 2010 flood, the Sulphur Dell area flooded again. Has the Mayor figured any flood mitigation costs into a new ballpark? He failed in 2010 to consider the damage that could be caused by Richland Creek on the planned west police precinct and had to add expensive damage mitigation, which still looked flawed afterward. One would think that he learned a lesson and has committed money to flood mitigation for all capital projects that need it. But I have heard nothing to that effect.

For the sake of argument, let's assume that Mayor Dean has taken care of flood mitigation at Sulphur Dell. All of that displaced Cumberland River water will have to go somewhere. Sulphur Dell is now essentially floodplain that kept many of us from flood damage in 2010. Flood waters at that time crested within a block of our house. If we have a future flood with a new ballpark and there are plans to push waters away from Sulphur Dell, whose homes will be inundated in Germantown, Salemtown, Buena Vista and Hope Gardens where they were not in 2010? Given that there is a daisy chain of flood events that results from displacing water in flood mitigation, has Karl Dean any secondary plans to protect our neighborhoods, businesses and homes from damage if a ballpark is built near us?

On this the 8th anniversary of Katrina flooding in New Orleans (which captured our attention at the time), I wonder whether the millions of dollars in federal flood aid in Nashville might be spent to help many more people beyond the patrons of an amphitheater.
Posted by S-townMike at 9/01/2013 02:32:00 PM