Metro Schools pulled me into their Twitter fight against my will

For some reason, the social media persona responsible for MNPS tweets decided to pull me into the drama resulting from pro-charter school protesters at their Bransford Avenue doors. I've never myself joined in a public protest of MNPS, and I certainly wouldn't in support of charter schools. But the communications person at the district lost his composure and decided that it would be effective spin control and triangulation to compare me to their protesters. All I did was blog--in more detail than can be contained by a picket--about my honest experiences as a public school parent the past 4 years.

Here is the sequence of tweets MNPS used to issue their talking points: 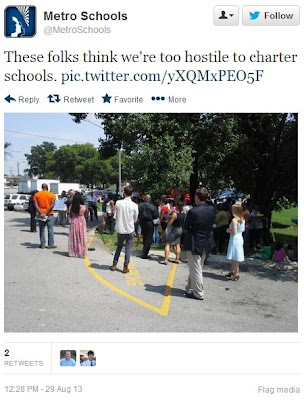 To please everyone? Really?

Metro Schools made an obvious attempt in the thread to minimize and marginalize my experiences and my reasons for doing exactly what Jesse Register encourages us to do: choose between public, private, and public privatized schools.

Okay, be irritable with me if you must, but why drag me into this drama with charter school zealots? Like I am the only person who has concerns about the privatization and commodification of Nashville's public schools? Beyond the distinct probability that there are others out there who share my experience and views, the comparison of me--an individual blogging an opinion you choose to read or not--with a group of people organizing a conspicuous, disruptive demonstration is itself silly. And there are others who have other differences with MNPS based on other reasons not even counted. Trying to please everyone? Hardly.

And again, why am I lumped with noisy demonstrators unsettling the tranquility of Bransford Avenue when all I did was blog an opinion MNPS objects to?

I resist being cast by Metro Schools in some extreme juxtaposition to people who want any and all charters approved. I have argued without fail that public education should be community-based rather than corporately-based. As far as I am concerned both Metro Schools and charter school boosters reject popular determination of public education. Both are beholden to corporate dollars and to venture philanthropists. I advocate something else: money should not be allowed to buy out the democratic process. Both bureaucratic district and education reformers are bought and paid for. Both have organized money. I advocate organized people determining public education policy.

In conclusion, public school parents, the lesson here is that if you choose to express an opinion at odds with Metro Schools you might be singled out on their social media for it. You might be dragged into a war that you never intended to fight. Either take caution or throw it to the wind.


UPDATE: more background on the protesters at Pith in the Wind. They were enabled by a Washington, DC advocacy group. And one of the protesters' targets, school board member Amy Frogge responds to their criticism in the wake of yesterday's activities.

Speaking of Pith in the Wind, I found that one of their writers made specious Twitter comments on our decision to send our daughter to a parochial school (I seem to be the "he" she refers to): 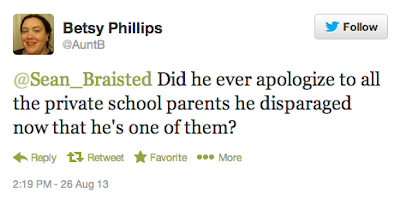 Now I recall that the last time "Aunt B" was out-of-joint me was when I questioned--in the wake of a soft-pitch interview with former DC schools Chancellor, current lightning-rod, anti-teacher lobbyist Michelle Rhee--her claim that one of her fellow reporters had actually exhibited "the fix" for journalism that Phillips predicted she would. Rhee is an acknowledged public figure who plies the high-visibility media circuit making her case for education reform. All my comments about Rhee have been made in that context. Not in the context of personal decisions of what is best for her children.

If you look at my blog post, I did not disparage Michelle Rhee for being a private school parent. I criticized the reporter for allowing Rhee to frame the debate so that she is branded as a public school parent without acknowledging that she also is a private school parent. There was branding going on by a public figure and the reporter failed to critically analyze the branding. So, asking for full disclosure is disparaging now? I tried to fully disclose in my blog post our reasons for leaving MNPS, and I'm not even a public figure. Journos are supposed to reveal the information that the rest of us may not access.

As to "all the private school parents" I have allegedly disparaged: well, I don't know what she means. While I am disposed to a well-adjusting and functioning public school system, I do not bear ill-will toward private school parents. For several years I have corresponded with other parents who have faced the tough decision to move their children out of MNPS. I do not recall expressing anything beyond simpatico with their difficulties and hard decisions. If I disparaged parents in the past, I apologize.

But again, what is the big deal with our decision? I acknowledged that there are ironies, but we are acquiescing to a degree to the system of "choice" that has been handed to us by the school district. And there is nothing ironic about the fact that for four years we chose to send our kid to an urban public school near our home in a transitional neighborhood. Has "Aunt B" ever made that choice? Eventually, it was high stakes testing married to a corporate culture (maybe even the threat of austerity) that drove us out of MNPS; it was not the inner city or our predominantly African American school.

Personal attacks on private individuals (relative to public figures like Michelle Rhee) by alt-weekly writers strike me as mean, bad faith in a system of "choice" they do not themselves question.
Posted by S-townMike at 8/30/2013 12:17:00 AM