Don't even think about commenting on a new ballpark, peons. You are fresh out of time.

Your ignorance is your bliss. What you don't have time to know about this ballpark deal cannot hurt you (at least until 2014 when it is too late to change anything): 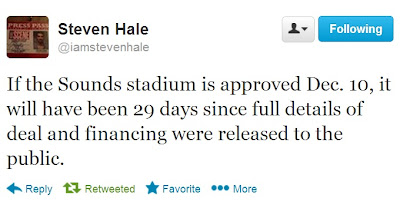 Once they break it, we will have bought it, ready or not.


UPDATE: Alright, there are several significant things I am learning that I believe I should share. Not like any of us has time do anything about them:

If those are the some of the new things we are learning in less than one month, how many more are we going to learn after council approves this plan on December 10 at final reading?
Posted by S-townMike at 11/26/2013 03:20:00 PM