Again, I am not included in the list of people privileged enough to enjoy the war of words in the email blasts between current and former CMs on the question of a smaller legislative body for Metro, but former East Nasty CM Jamie Hollin has entered the fray. From my Inbox:

[To John Summers:] Are you going to educate the rest of us on why this is not a good idea? I feel if you put me on this list, you at least owe me more. Your email below is simply conclusory absent some fear tactic about developers, which also translates into "voters are dumb." This ain't DC--just ask whomever ran against Amy Frogge for school board.

You also state that your rarely disagree with CM Evans. She can tell you that I rarely agree with her on anything. EVER.

However, she has made compelling arguments in support of reducing the council and has the support of the Charter Revision Committee, which illustrates the depth of her efforts. Notwithstanding my past and future disagreements with CM Evans, I know a good thing when I see one. This is one of those times and I'm glad you gave me the opportunity to demonstrate the same.

Besides, it is very, very difficult for a citizen to get involved in a process and attempt to influence the majority of a 40 member body on any matter. Reducing the number will increase the quality of the candidates because weak candidates--even those with campaign war chests--will lose. Moreover, the ubiquity of email, Facebook, twitter and traditional communication methods make contact with your CM easier.

I'll listen to your rationale to oppose as soon as you develop some. And, I earnestly hope you do because I want to learn why this shouldn't be a slam dunk. I know what it takes to beat the executive on the floor of the council and 40 members makes  the Mayor's job very easy. If you want a weak legislative body--like we have--keep the status quo. If you want a check on the executive, support CM Evans.


Between his PR work for the bus rapid transit project to benefit Downtown and West End businesses ("the Amp") and this diatribe against questioning the idea of a smaller council, Mr. Hollin seems to have moved away from his days as a firebrand populist on the council challenging a mayor over a Fairgrounds development plan that would have terminated inexpensive entertainment for Nashvillians who could not afford the Titans or TPAC.

Of course, the former council member does not give many good reasons for why voters should support a smaller council even as he accuses Mr. Summers of failing to give rationales.

As a private citizen, Jamie Hollin is entitled to his opinions, but he also invoked his service as CM, so I venture to say that this look is not good for him. He looked much better fighting the good fight for ordinary people as a council member.

In the end, calling a smaller council "a slam dunk" is hyperbole. Even if you believe there is a strong case for it--which I have yet to hear--there have to be risks. Let's talk about those, too.


UPDATE: Jamie Hollin ("@jrhollin") hides his tweets from public consumption, so I'm not sure what he said in this Twitter exchange about my blog post. I gather it was somewhat disapproving, given Justin Mundie's self-defense that he doesn't agree with it himself: 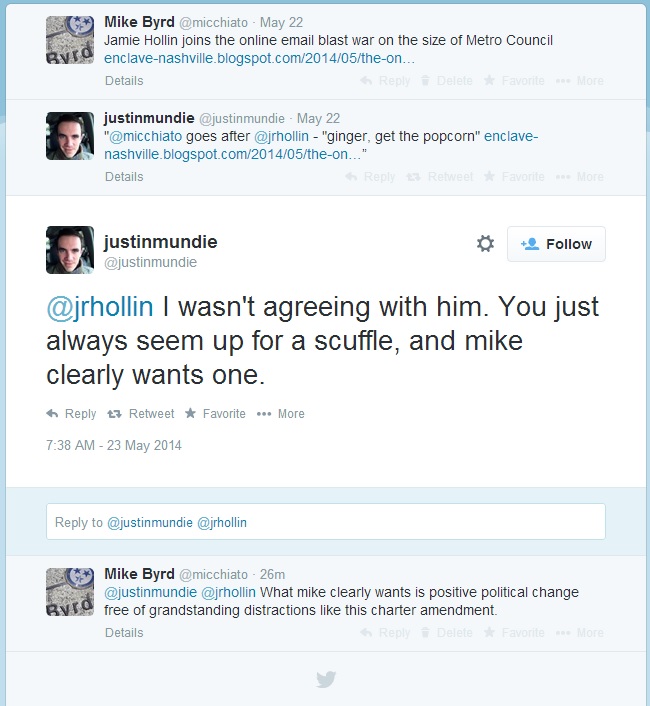 Wondering: why Master Hollin can't make an appearance here and comment his thoughts about my views below rather than shielding them in a private account? Maybe for the same reasons he does not include me in his email blasts?
Posted by S-townMike at 5/22/2014 08:46:00 AM