The question was "penetrating" and pointless

What about charter schools? Summerford says they haven’t become “labs of innovation” like they were supposed to, though she admits she’s never been inside of one.


I don't know Ms. Summerford, but let's say she had been thinking like a savvy politico and made the anecdotal and symbolic (some might say cynical) gesture of visiting a charter school so that if a journalist asked if she had been in a charter school she could say, "Yes". If only that were enough. If this were to rise to the level of objectivity, Ms. Summerford would have to pick a representative sample of charter schools to visit, and then could she ever truly visit enough? Or would she like most thoughtful people have to rely on the data needed so that she could keep her daytime job and her union responsibilities? She would practically have to become a sociologist instead of a union leader to satisfy the questions and even then, there is the problem of interpreting the data.

Maybe the questions never end, which makes Mr. Farmer's particular query even more premature and pointless. It was an anecdotal question that would have been useless at the level of policy; although for the ax-grinders and red-meat throwers it was an opened gate to "what's wrong with unions". Journos remain gatekeepers of what counts for news.

But on that point about Mr. Summerford's union responsibilities: I fail to fathom why a journo would expect someone who is personally and philosophically committed to the right of collective bargaining to approach charter school corporations, which have committed themselves to dismantling teachers unions, for permission to access their property. The question is not, "Why hasn't she visited a hostile enterprise?" Frankly, why would she do so? Do we expect any other professional alliances to enter institutions bent on their destruction before we take them seriously?

Do we set the credibility of journalists on whether they are willing to enter the machinery of institutions devoted to dismantling freedom of the press? No. That's illogical and moot. We judge them by their stories and by the quality of their questions and many times by their unexamined biases.

Expecting union members to enter environments that are hostile to their collective bargaining rights is also unreasonable. And teachers are not bound to be politicos making staged appearances for the vivid presentation on the news. (An honest journalist will concede at this point the conflict between news media's commercial interest in provocative drama and canned symbolism vs. the journalistic interest in transmitting mundane, unjuiced information to audiences). That a local journo would expect otherwise is biased by definition. Sometimes you have to think outside of partisan politics rather than be captive to it; at least if you want to be considered by some of us as objective.

The problem here is the typical journalistic fallacy of false equivalence caused by strictly defining two polarizing sides of a debate and setting up interview questions at a mean between them, based on the talking points of each. That mean is often assumed to be objectivity or neutrality. Here is what I consider an expression of the fallacy of false equivalence in journalism in the context of a defense of Mr. Farmer's interview: 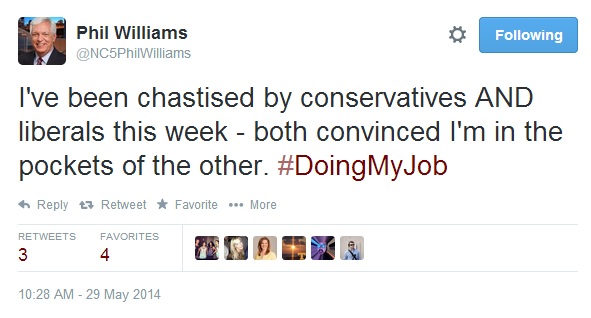 However, defining two sides who do not share the same in priorities or character, and then creating a continuum on which one sits between them is itself as subjective and as predisposing as the two sides staking out a position.

The angle of interview questions is fabricated by the ideas the journo subjectively considers significant. Setting oneself up as a pseudo-moderate of sorts is no less partisan than interviewees one pushes to the poles. There are a host of other questions and considerations that should come up for discussion and that are relative to the issue of privatization of public education that also go ignored and downplayed under the false auspices of being neutral. And those questions are buried further by self-congratulation when these journos judge their neutrality as confirmed by criticism coming from the predetermined left and right.

So, even to charge a journo with not asking an objective or relevant question in the end gets one dismissed as "liberal" or "conservative", thus vindicating journalism's otherwise subjective projects. That's no way to handle a legitimacy crisis.
Posted by S-townMike at 5/29/2014 03:00:00 PM