I have been closely following the fallout of police officer Darren Wilson's shooting of teenager Mike Brown and the resulting protests in Ferguson, MO for the past week or so. I have many impressions I could share, but for now I want to focus on the use of military-style armored vehicles in residential neighborhoods to control violent "agitators". Many of you, like me, have seen Metro Nashville Police display their armored vehicles at community events, and I have to say that I will never look at any of MNPD's military-style weaponry the same way again.

Why not? Because I have seen them deployed against peaceful protesters as well as the "agitators" in Ferguson. I've seen, via Vine videos, innocent kids tear-gassed. I've seen pictures of people gassed in their own yards away from the main sites of protests. I've read accounts of armored vehicles rolling through neighborhoods shooting rubber bullets, pepper-spray-filled paintballs and unleashing enough toxic particulates that--even in closed homes--can endanger the lives of asthmatic children. I've read of a teenager begging a reporter not to leave her neighborhood because she was certain that the only thing between her and a round from a police assault rifle was the watchful presence of journalists.

So, I cannot look at these death-dealing armored vehicles the same way anymore. Even when they are proudly displayed at community events. (And why did we never stop to question how much these rolling behemoths cost taxpayers? Why give the authorities the benefit of the doubt in the first place?) I fail to see any justification for using military-style weaponry in largely pacified residential neighborhoods. It seems like overkill when the biggest threat coming from the handful of "agitators" is something like a couple of handguns and a single Molotov cocktail.

This is what Nashville police used to consider armor: 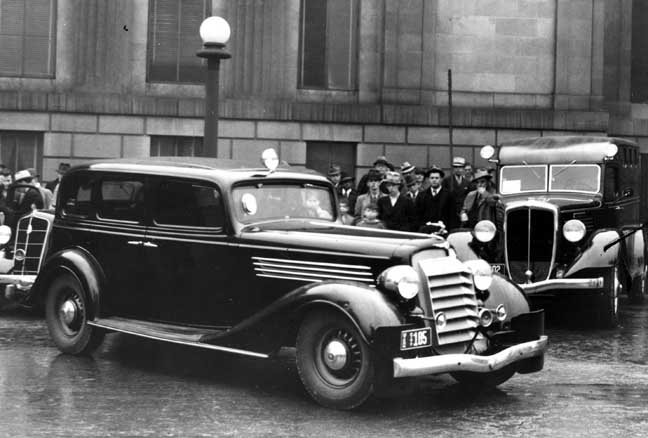 This is what Nashville police now consider armor:

The changes reflect the political climate post-9/11, but they also reflect a futile "war on drugs," which has been conducted since the 1980s. They also reflect a military-industrial complex, a defense industry that has been allowed to market their wares unchecked by government regulations and encouraged by elected officials who strive to bring home more pork. What they do not reflect is any change in the racial climate since the civil rights protests of the 1950s and 1960s. Police are simply more efficient at dealing out pain and death disproportionately to people of color and to working-class people with military-style plating and and assault weapons (by the way, tear gas is banned from battlefields by international treaties).

Ferguson shows that the most modern armor is overkill outside the battlefield. Police are not just "taking out bad guys" (as they like to say), they are endangering innocent lives and unleashing unnecessary collateral damage. They are laying waste to neighborhoods and people's lives.

Whether you believe that you will ever see one of these military-style monsters roll down your street or cut through the clouds above, unleashing a firestorm of injustice, there are honest poor people, honest people of color who do believe it to be a distinct possibility. If it can happen to them those of us who question the possibility are merely the next in line.
Posted by S-townMike at 8/19/2014 11:34:00 AM