Sorry State of a Neighborhood: Trash Abides on State Property. Baseball Does Not.

Yesterday I waxed nostalgically on historic Sulphur Dell, an homage to baseball. Today I want to address some of the unsightly aspects of the land on which the venerable old ballpark once sat.

But let me back up. Since moving to Salemtown six months ago, my family takes regular strolls around the Bicentennial Mall area, including the area where Sulphur Dell used to sit. The unsightly things I notice each time I pass State Employee Parking lots #6 and #7 (which sit in the block I have already mentioned) are the piles of trash on the small grassy areas that border the lot.

For litter to appear in the city is not news. In my cynical, more suburban moments, I use “trashy” and “urban” synonymously. However, what is news is the same litter sitting in the same spots for six months on public land a few blocks from where neighbors are fighting an ongoing war against litter. That's right. I am a weekly witness to the same trash lingering for half of a year on the otherwise grassy islands around lots #6 and #7.

Below is a photo I took of some longstanding litter last week as I took one of my leisurely strolls. If you look closely you might be able to see that the beer labels are faded with age. If you cannot tell from the photo, just drive or walk by and look for yourself. They were still there yesterday; they'll probably still be there tomorrow. 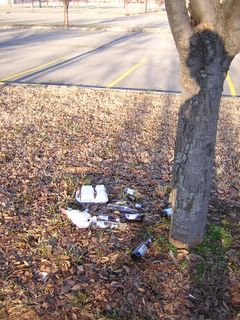 The 5th Ave. side of state employees' Parking Lot #7. The state could be a better neighbor. Photography by S-townMike.

I am all for voluntary litter clean up and taking responsibility for your neighborhood and what not. But, honest to goodness, I spend enough time picking up litter around my Salemtown neighborhood. I go through latex gloves like they were going out-of-style. (Not that they were ever in style). If I have to volunteer to pick up all of the trash that stretches from downtown to the north bend of the inner interstate loop, then I will not have any more time to spend with my family.

Besides, Tennesseans pay remarkably and regressively high sales taxes; the governor and legislators are bickering over what to do with the lottery surplus. Is there not enough money to police the grounds of public properties? Is it too much to ask that the state pay somebody to clean up the litter around state employee parking lots?

I know that old Sulphur Dell is paved over now to serve state employees. However, the state of Tennessee could at least honor the old ballpark’s heritage by keeping the place tidy. Save the haunt for ghosts, not garbage.

02/23/2005 Update--I drove down 5th Ave. yesterday and noticed that the bottles in the picture above were gone. But there was still trash on the grassy areas, including beer cans and the big piece of Styrofoam that has been laying around for months. Still looks trashy to me.
Posted by S-townMike at 2/16/2005 10:53:00 AM