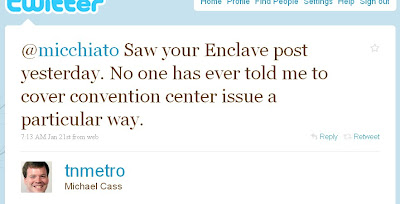 It really does not matter whether anyone at the Tennessean ever told Michael Cass what or how to report on the Mayor's Music City Center project. What matters is that the Tennessean donated $15,000 to the Music City Center Coalition and that Mr. Cass wrote stories on the project that were part of a free publicity portfolio complete with air-brushed galleries of the MCC concept.

Michael Cass is a member of the Tennessean family (at least until they decide they can't afford to keep him any more or until he gets sick of taking unpaid vacations because of their spending decisions). He does not have the latitude to hive himself off from the business side and shelter himself from criticism. That is exactly the same tactic his publisher used to excuse their political donation to the Mayor's cause in the first place.

Their "business" decision opened their reporters up to suspicion and criticism, so it makes no sense for Mr. Cass to echo the same defense. Ignorance of unethical action, especially when part of his job is supposed to include investigative reporting, does not shelter his journalism from reasonable skepticism or critical questions of influence. He is not independent. His political beat is a Tennessean beat, and the Tennessean has bellied up to the bar of political influence and put $15,000 down for its own shots. If he doesn't want the albatross hung around his neck on every MCC story he writes in the future, then he needs to stop participating in the MCC public relations campaign and find other things to write about.

A synchronal problem is that Michael Cass's writing on the Music City Center has not been complete or balanced with regard to reporting information that might hurt the project. He has been quick to conform to the hack that Gaylord is fueling the opposition in its own financial interest. One is hard-pressed to find any original Cass reporting that hit the convention center booster side hard. He was late to and sparse on news of the $400,000 overage to McNeely, Pigott, and Fox PR. He has not brought the ethical questions about convention center financier Goldman Sachs into the debate. He was not particularly revealing about problems that MCC construction contractor Clark Construction Group had in an Orlando convention center project.

While he is arguably Nashville's best local beat reporter, what critical piece does Mr. Cass have on his mantle that would mitigate, let alone offset, his publisher's $15,000 donation? How has his reportage been hard-hitting on those who stand to benefit from the building of the Music City Center? From that perspective his journalism has been soft; a pillow fight with MCC boosters does not dispel the perception that Tennessean reporting is as slanted as their donation is flagrant.
In the end the whole Tennessean approach to the Music City Center is like a puzzle that fits snug. The $15,000 is a piece. The biased headlines generated by copy editors are a piece. The air-brushed picture galleries are a piece. And Michael Cass's tame reporting is a piece (and let's not leave out reporter Nate Rau who did his part to fluff the throw pillows on the side). Regardless of the reporter's best intentions, they all fit together to supply the Music City Center Coalition with sweet marketing that they never had to purchase, but in fact were paid for.
Posted by S-townMike at 2/08/2010 07:27:00 AM