What happens to our rights in public-private parks?

I had the opportunity to chat face-to-face with former CM Lynn Williams at an online news conference a couple of weeks ago. Our chatter involved local politics, guns in bars, smartphones, and private parks.
It was the latter topic that especially sparked my curiosity. During a conference session on legal issues in recording news events on smartphones, the legality of shooting footage on public vs. private space came up. That spurred the following tweet from Lynn: 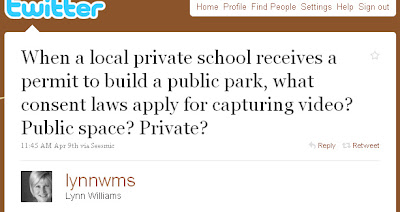 At the end of the session we met up, and she elaborated on her point. She had in mind Harding Academy's acquisition of private property to build a public park for its own athletics program. Since the "public" park is actually privately-owned, would someone recording a news event there have to get consent from the school to share that footage? A chronicler or reporter can legally record news on public property without permission, but when s/he sets foot on private property, consent must be attained. Thus, if I videotaped a Harding parent assaulting another parent's kid on Harding's ballfield, consent seems a murky issue, even with public park permits.
I replied to Lynn that the same problem arises with Belmont University's lease of Metro Nashville's Rose Park to build its baseball, softball, and soccer fields over the heads of neighborhood protests. While the hyper-locals are concerned about traffic, zoning, and open meetings, another problem that arises is the question of consent to record news events in Rose Park while Belmont is exercising its lease rights. Metro may be so cash strapped that it has to offer public park space to high bidders, but the question of whether we can video- or audio-record events that unfold on privately reserved land without Belmont's consent becomes more murky (granted, I'm not a lawyer).
The underlying squeeze here is the often vaunted, infrequently examined notion of public-private partnerships. While that amalgam may provide new opportunities to pool resources and reduce replication of services, it seems to become a sticky mishmash of legal problems for free individuals who intend to exercise their rights of expression in public space while respecting privacy rights. Those who try to document and record events that unfold in their communities must become more attuned to the obstacles erected by public-private partnerships. We ignore them at our own peril.
Posted by S-townMike at 4/21/2010 08:52:00 AM