Musing over how low we set the bar for CM Eric Crafton. 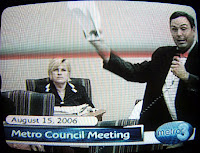 Crafton's a nice guy who, at the very least, hasn't advocated secession or suggested Islam's a cult.

With the superficial change in [Crafton's] legislative language came a shrewd change in the argument's focus. No longer was the bill aimed at illegals.

[Crafton] uses any tactic, from moment to moment, that he believes will help get him want he wants, and he does not manuever shrewdly, but with wholesale, like a sledgehammer demolishing dry wall.

I'm going to let Mayor Purcell have his way for a short time.

The U.N. recently adopted English as its working language — the only people that objected were the French ... That made it an added bonus in my opinion.