When the local news media continues to rewrite catastrophic history to a national audience, hindsight of the Nashville flood is not 20/20

The most frustrating characteristic of the Nashville news media is that they rarely ask critical questions of their interview subjects regarding even the most commonly held fallacies. Last May as local feelings were festering in the wake of our 1,000 year flood that national media attention that was due us was too focused on the Gulf oil spill, a popular meme surfaced comparing Nashville's flood response in rather grandiose ways to the New Orleans response post-Katrina.

Having been focused on New Orleans doggedly during those dark days of Katrina and having witnessed problems in with emergency response in Nashville as they unfolded, I felt compelled to write a minority report rather than join self-congratulations and the revictimization of our wayward neighbors to the south:


Implicit in this preoccupied reaction is a response to the old nemesis, New Orleans. It’s a slam against another American community by placing ours on a higher moral plane ....

What is most striking in the Nashville narrative is that at its base it is a disingenuous re-write of history. It is a judgment call based on a fabricated all-things-were-equal scale ....

The rub, the difference here between these two cities is precisely evacuation. Mayor Ray Nagin declared a state of emergency and a mandatory evacuation of New Orleans two days before Katrina’s landfall and the failure of the levees. Consequently, 1 million people fled from the Big Easy in those 2 days. There was no evacuation in Nashville in advance of our 1,000 year storm event. Nobody knew what to do. Metro government was hamstrung because, unlike New Orleans and its recent history of hurricanes, we only had 2 or 3 other years in the last century to compare this event to. And hurricanes are not just big rain events. They are approaching monsters to coastal cities and the risk is certain.

We are here to take care of ourselves. And my suspicion of undue arrogance leads me to believe that had 1 million New Orleanians stuck around the Big Easy, they would probably be more competitive in showing a volunteer spirit. The people of New Orleans, outside of the lower classes who had no choice, would not be waiting on FEMA, which kept failing them so miserably, so spectacularly in spite of federal promises about rebuilding New Orleans to the contrary. Many would have been able to serve their community as enthusiastically as Nashvillians are serving theirs.

Behind the Nashville hand-wringing is a tale of two cities, one moral and self-sufficient, the other unforgivable and incapable.

There were even more spot-on comments to my reflections on these fabrications last May:

This is really a tale of four cities. You are right on target with the implicit comparison of Nashville and New Orleans. But don’t ignore the explicit claim that people are nicer to each other here than in Los Angeles and New York City. This shows a fundamental ignorance of how people interact in those places. NYC is notable not only for people holding doors for each other; but you haven’t seen anything in casual neighborliness and helpfulness to strangers until you’ve seen how automatically passers-b help mothers with strollers up and down the steps to the subway there. But it, too, fits a narrative: the narrative that real human values can’t be found on the coasts.

Nonetheless, some in the local news media mark this anniversary of our disaster by continuing to implicitly transmit the grandiose meme that somehow, when the chips are down, Nashville is a cut above everyone else. 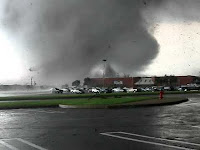 The apples-to-oranges comparison with New Orleans continued over the weekend past to a national audience on public radio, and this time local reporter Blake Farmer maintained that Nashville serves as an inspirational "model for Alabama and other states" suffering under brutal weather.

There is a whole field of research out there called "non-profit and voluntary association studies" with social scientists without skin in the game who can be objective about why people feel motivated to volunteer in crisis situations. Volunteers have noble reasons; volunteers have less than noble reasons. The common denominator that they share is not their reasons, but their availability.

Likewise, there is no one reason why 20,000 Nashvillians volunteered to aid in flood relief last year. Some didn't want to wait for government. Some believed it was their moral duty. Some wanted to fight their own depression. Some wanted to feel useful making progress. Some wanted the networking opportunities. Some wanted to positively brand their business. Some were following the crowd. Some had ulterior motives of gaining an advantage over the less fortunate. Some wanted to maintain a favorable status with their employers who partnered with charities. Again, what these thousands shared was not their rationale for joining in the effort, but their availability. The NPR report reduced the reasons down to one and oversimplified local voluntarism to support the grandiosity of Nashville's flood narrative.

Full disclosure: I was among the 20,000 who volunteered. My family worked in two different aid distribution sites. When we heard that a South Nashville Egyptian community was suffering, we went out and bought supplies and nonperishable food, and helped their local leaders allot and distribute our donation door-to-door. I did not blog about this, because it seemed like self-promotion at a time when the attention needed to be focused on them.

But I blog on my own contributions a year later to say that I don't want to be a model for anyone else. As one of the volunteers "celebrated" by Metro government and the non-profit community today, my views ought to weigh in on this remembrance, too.

And in my opinion, it is presumptuous for NPR and self-aggrandizing for Nashville to trot us out nationally as a shining beacon for others who are suffering calamity right now. The last thing that Tuscaloosa, Birmingham, Rome, Ringgold and everywhere in between need now is a celebration of Nashville's recent past. They just had a single history-making, beastly supercell tear through each of their communities. 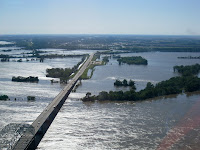 Memphis is about to be engulfed by one of the grand rivers of the world, the Mississippi. And yet, today, we're focused on us. It amounts to vacuous, hollow symbolism that draws our gaze away from our beleaguered neighbors.

If anything, our experience of coming out the other side of the hells of destruction that other people are in or just entering ought to give us pause, the humility to figure out what we can do to support them, not promote ourselves. And using New Orleans again as our own personal foil is both ignoble and revolting. We should expect more from ourselves and demand better from local journalists.
Posted by S-townMike at 5/02/2011 12:45:00 PM