I found this Re-elect Karl Dean Facebook campaign ad without really trying last week. I had added it as an update to a previous post on Sean Braisted's affinity for Hizzoner, but malfunctions at Blogger late last week deleted it. As I mentioned, Braisted seems to be trying to out-Kerr Gail Kerr on campaign boosterism. However, the ad sums up the whacked rationales for terms of endearment, since Mayor Dean did not himself overcome the flood or the recession. 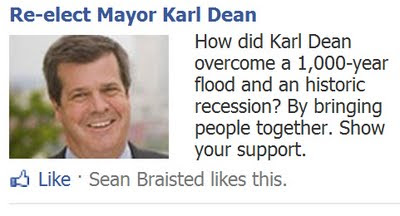 By the way, any comments Enclave readers made late last week were stripped by the Blogger malfunctions, not by me. If you left a comment that disappeared, you will have to re-comment.


UPDATE: I suppose the days are over when Democrats identified with liberal blueprints like the New Deal, the New Frontier, and the Great Society. There was a time I can barely remember when being Democrat meant standing for social justice and civil rights more than economic expansion, when it meant singing protest songs like "This Land is Your Land, This Land is My Land" instead of patriotic hymns like "God Bless America."

Now being Democrat seems to mean posturing as conservative as one possibly can without actually joining the GOP. Case in point, Sean Braisted's response to a special Facebook contest of Tennessee Democrats that encourages its friends to complete the sentence "I am a Democrat because ..."

When I was young, this is the kind of stuff we heard from Reagan Democrats. Now worker and consumer protection, distributive justice, and common access to resources are afterthoughts to untrammeled growth, concentrated wealth, and trickle-down benefits. I guess the days when Democrats self-identified with critiques of the injustice, the classism at the heart of wealth generation and waging war are gone.
Posted by S-townMike at 5/14/2011 02:38:00 PM