Can anything good come from public housing? Verily.

If you followed yesterday's national "Day of Action" by Occupy Wall Street, you are aware that there were lots of dramatic moments: occupiers bottlenecking all points of entry to the New York Stock Exchange, California sit-ins at Bank of America, arrests in Atlanta and Portland, and marches and/or bridge occupations in several cities. Perhaps the most dramatic moment of the entire day occurred when giant projected images appeared on New York City's Verizon building towering over a scheduled concluding march across the Brooklyn Bridge (by a crowd that was estimated to be between 32,000 and 45,000 protesters). 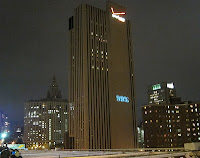 Protest messages and themes were projected on to the large building from a hidden location that kept both police and news crews guessing. The light show provided an uplifting contrast to the mood of the protest, and the surprise of this ballsy tactic capped off the effectiveness of the day perfectly.

But more impressive than the tactic itself was the story of how the projectionists gained access to a place seemingly outside the suppressing clutches of NYPD. That access was granted by an unlikely hero who generally does not have the power to grant access for others to much of anything else:


Opposite the Verizon building, there is a bunch of city housing. Subsidized, rent-controlled. There's a lack of services, lights are out in the hallways, the housing feels like jails, like prisons. I walked around, and put up signs in there offering money to rent out an apartment for a few hours. I didn't say much more. I received surprisingly few calls, and most of them seemed not quite fully there. But then I got one call from a sane person Her name was Denise Vega. She lived on the 16th floor. Single, working mom, mother of three.

I spoke with her on the phone, and a few days later went over and met her.

I told her what I wanted to do, and she was enthused. The more I described, the more excited she got.

Her parting words were, "let's do this."

She wouldn't take my money. That was the day of the eviction of Zuccotti, the same day. And she'd been listening to the news all day, she saw everything that had happened.

"I can't charge you money, this is for the people," she said.

She was born in the projects. She opened up her home to us.

She was in there tonight with her 3 daughters, 2 sisters. The NYPD started snooping around down on the ground while the projections were up, it was clear where we were projecting from, and inside it was festive.

"If they want to come up they're gonna need a warrant!," her family was saying. "If they ask us, well, we don't know what they are talking about!" They were really brave and cool.

In my opinion there is a common human tendency to root for the underdog, and Ms. Vega's story is that she was the underdog who made possible Occupy Wall Street's highest moment in an already high-flying day of action. Yesterday was historic and a working-class mom helped add a bold exclamation point.
Posted by S-townMike at 11/18/2011 11:50:00 AM