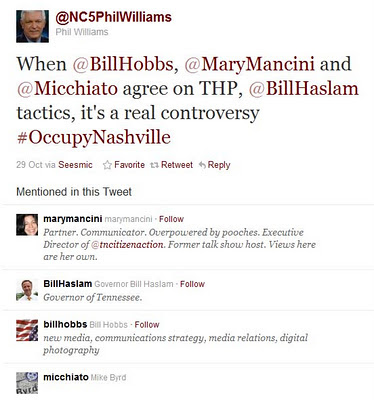 Not sure why Phil Williams mentioned me along with two leaders from the Republican and Democratic camps during the Twitter chat about Bill Haslam's crackdown on Occupy Nashville. The Governor bungled the overnight occupation of Legislative Plaza, and he turned a small upstart demonstration with practically no strategic accomplishments, bearing an uncertain future into an ire-raising constitutional fight for civil rights. Supporting Occupy Nashville's right to stage on public property was a no-brainer.

While I applaud former TNGOP spinmeister Bill Hobbs for taking a strong stand in support of Occupy Nashville, this question was bound to divide Republicans, many of whom have not lost all their senses about the people's right to protest. Sure, some token party apparatchiks spoke in favor of the curfew, but there is always room for both craziness and posturing in the public discourse.

No Tennessee Democrat is going to support the curfew with a Republican Governor fumbling the ball. Their electoral chances increase the more Bill Haslam screws up. This is not to suggest that no Dems support the curfew on principle, but so many Democratic officials are financed by the big shots that Occupy Wall Street is taking on. So, supporting Occupy Anything cannot be easy for those plugged into the party system. Governor Haslam did the Democrats a favor last week by giving them an easy choice. If Phil Bredesen had done this we would hear a lot less from Democratic Party supporters, who seem more attuned to social issue controversies, rarely raising a peep to questions of wealth, poverty, and economic justice.

However, I can't fathom why I'm mentioned. I have little or no connection to the parties. The last time I volunteered to work to elect Democrats was 1988. The last time I considered a Republican worthy of my vote was in high school, when I was too young to cast a ballot (the indiscretion of youth). I consider myself an independent with a profound distrust in the parties, and thus in the ballot (even though I do vote in nearly every election). Maybe Phil Williams considers me the extreme liberal in this group and the most predictable one to support Occupy and bash Bill Haslam. That would be a rather uneasy, fleeting Kumbaya with TNGOP and TNDEM.

There was no real controversy. It was an overwhelming majority against Bill Haslam. He was bound to back down. Of course, now that the Haslam Administration has backed down, there still is no controversy, which for me is part of the problem.

I admit that I be would wrong to say that Bill Haslam was the sole catalyst of the dust-up over access to Legislative Plaza and the consequent ascendance of Occupy Nashville. In fairness to ON, their courage to face arrest and jail, their tenacity to return night-after-uncertain-night to occupation, and their unimpeachable commitment to social change also contributed to their win over the State of Tennessee.

But I do think the strategic choices they make fit the efforts of the party wonks and of the mainstream journalists to frame their protest strictly in terms of electoral politics while leaving economic questions out of the equation. A WPLN story yesterday reported that ON leaders are going to focus more on their group's identity and the perceptions created in the media. They wrote a nonconfrontational letter to the Governor asking for collaboration with his team on the occupation. After hearing that Vanderbilt College Republicans were going to come out to protest their protest, ON leaders baked literal cookies and put out the proverbial welcome mat. This afternoon Occupy Nashville will march to Nashville Electric Service of all places.

I'm confused as to how any of these actions support ON's stated goals to challenge corporate personhood and the political influence of corporations. The Nashville Chapter says that it exists to support the Occupy Wall Street movement, and yet it chooses different, narrowly political targets than those on Wall Street. OWS NYC has sent several waves of protesters to the headquarters of Goldman Sachs. OWS Oakland closed down the Port of Oakland for part of a day. Yet, Nashville leaders are marching on NES and patronizing Vandy frat boys with cookies.

In contrast, the law student arrested during OWS NYC in front of a bank in the video below personifies a core organizing principle of Occupy Wall Street in his impassioned and personal exclamations about foreclosure:

Tomorrow has been declared a national day of protest against the large banks called Bank Transfer Day. It will be the culmination of a month that has seen 650,000 people transfer their funds to credit unions and local banks in what could be one of the largest mass acts of divestiture in US history. And yet, what has Occupy Nashville chosen to do today? March on NES, which is essentially an arm of government (Power Board members are selected by Mayor Karl Dean and approved by the Metro Council).

The problem with protesting government is that big business owns government. And the political parties are the servants not of people but of the corporations who fund them. Focusing on government is like focusing on the symptoms rather than on the illness itself. That said, the NES protest does fit the conventional slots for partisan politics in Tennessee even as OWS claims to be an unconventional protest. As such it detracts from this weekend's focus on banks. In my opinion, Occupy Nashville should try to be less of a podium and spotlight for Tennessee Republicans and Democrats to frame their campaign messages and more of an alternative protest along the lines of OWS protests.


UPDATE: President of Tennessee Young Democrats fawns on Occupy Nashville. My guess is that he hopes to flip the protest into votes for well-heeled Dems come election time.


UPDATE: The Occupy Nashville Facebook page posted a video of a visit to their camp from the NES CEO earlier today, where occupiers try to make clear their reasons for marching on NES and he tries to make clear his motives for misusing funds. Note one of the commenters replying to the video pointed out that his salary still puts him in the 99% that Occupy Nashville wants to advocate against the 1%. Interesting quandary.
Posted by S-townMike at 11/04/2011 08:50:00 AM