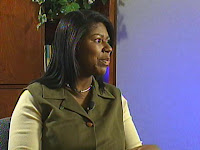 While I was on vacation the week before last, a concerned parent whose child had attended a North End school  responded to a previous post I wrote criticizing school board member Sharon Gentry's demeanor at a public meeting. I did not think her comments should be relegated to a 2011 post that may or may not be seen in 2012:

I was a parent in this zone at Churchwell Elementary. My son was constantly assaulted and bullied almost from his first day of school. As a very involved parent, I was in the school almost daily volunteering, checking on my son and offering support to teachers, administration and support staff. I reached out to Sharon Gentry in dire need because of the assaults and got NO RESPONSE to this day. She simply doesn't seem to have time or care about the needs of her constituents. I finally had to pull my son out of that school after he'd been choked, had his eye blacked three times, kicked in the stomach and pushed down stairs by other 4 grade students, boys and girls. Churchwell has all the means to be THE BEST elementary school in Nashville, TN if we can get the proper leadership at the School and Board levels. Even though I have removed my son for his own safety, I still support the efforts to make North Nashville schools safe and extraordinary places of learning! It has to work as that is the only opportunity most of those students have.