Teach for America or perhaps "Temps for Nashville on Poverty Safari"

In the middle of a Twitter bull session a couple of weeks ago on charter schools Shani Dowell, Director of the Nashville branch of Teach for America, chimed in to challenge the perception that charters are free to expel underperformers and cream overachievers. She made the claim that "the data" prove those perceptions "false" (by the way, data usually does not prove, but indicates; that is a discussion for another time): 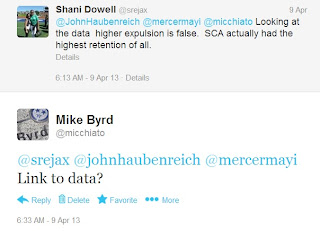 Since she included me in her point about "the data", I asked Ms. Dowell for links to "the data" to which she was referring. I assume that "SCA" refers to Smithson-Craighead Middle School (a charter) and not St. Cecilia Academy (a private), since the discussion was about charters. Although, on second thought, "assuming makes an 'ass' out of 'u' and 'me'", so she could be referring to the private school. On that score, her point would be absurd to a degree that it requires no reply.

However, risking the role of the ass, I'll go ahead and assume that she was referring to Smithson-Craighead, which is now suing Metro Nashville for intending to close its campus due to its abysmal performance. Consider what the lawsuit alleges: that SCMS students will be “forced to endure an educational experience of lesser quality” without the faith-based charter school.

That charge is an implicit acknowledgement that the charter "creams" (that is, it takes the best students from public schools "of lesser quality"). One of the reasons that public schools might be "of lesser quality" is that unlike charter schools they have an obligation to educate all students, good and bad, right and wrong, passionate and indifferent. The argument is also a tacit endorsement of the idea that in being free to take students of their choosing, SCMS can also rid themselves of and ignore students of their choosing.

While I would like to see the data, I do not need the data to understand the common sense, indeed the self-evidence, of that logic.

But getting back to my point, I waited and waited for a response so that I could see "the data" for myself, but Ms. Dowell never got back to me. I gather that either there is no objective data or the data can be interpreted in ways that do not prove my perceptions false. I've searched for the data online myself and not been able to find anything regarding Smithson-Craighead.

So, maybe Ms. Dowell is too busy to get back with me on "the data". She has got a local TFA branch to run. That TFA branch is currently absorbed in a "One Day Warrior" fundraising campaign to get a $10,000 grant from the national office, which the local branch claims is "the equivalent of bringing two new TFA teachers to Nashville".

Are they hoping to score the dough as they claim so that "all children in Nashville will have access to an excellent education"? Or are they doing so to indulge two privileged, but unseasoned leaders in what one observer calls "a poverty safari"?

The purpose of TFA is not to necessarily improve the lives of the kids their teachers teach; rather, it is to give bright, young leaders direct experience of the problem. The TFA recruits get to see right in front of them with a human face where we are failing our poor kids. And since these recruits are bright, young leaders, when they go on to do bright, young leader things, they will have this in their mind and fight for change. So on this view, TFA has a long-game strategy that will materialize down the line when these TFA teachers — most of whom quit of course — get into positions of political (or other sorts of) power and have the ability to make things better.

On its face, this strategy is wildly offensive. Basically it says that we are sending TFA recruits on 2-year poverty safaris. The point is not to accomplish anything while on the safari: it is just to watch and observe. See what it is like and become acquainted and maybe emotionally attached to the issue in some way so that later down the line you can do something more meaningful about it.

In addition to being fairly cringe-inducing, the theory is off-the-wall ridiculous. The basic problem is that even if these folks find themselves empowered to remake education, two years of failing in a classroom will give them no earthly idea as to what the problem is. These are not social science researchers and collecting impressionistic experiences during a couple of years of teaching some poors is not a good method for figuring out the drivers of a big, widespread problem like this. What’s more, since they are primarily just in the classroom, their “solutions” will almost certainly focus on schools. This would be fine if there was some consensus that this was the best place to focus, but the big counter-theory is that this is a totally misguided focus from the beginning. The poverty safari method for analyzing and coming to understand the contours of this problem is a total joke.


Another observer, a university professor who used to support TFA recruitment of his students but now no longer even allows them in his class, resents the unequal allotment of benefits that accrues during safari:

TFA alumni have used this access to move rapidly into positions as heads of local school systems, executives in charter school companies, and educational analysts in management consulting firms. The organization’s facile circumvention of the grinding, difficult, but profoundly empowering work of teaching and administering schools has created the illusion that there are quick fixes, not only for failing schools but for deeply entrenched patterns of poverty and inequality....

Not only has there been little progress in the last 15 years in narrowing the test score gap by race and class, but income inequality has become greater than at any other time in modern American history. TFA’s main accomplishment has been to marginally increase the number of talented people entering the teaching profession, but only a small fraction of those remain in the schools where they were originally sent.

But the most objectionable aspect of Teach For America — other than its contempt for lifetime educators — is its willingness to create another pathway to wealth and power for those already privileged in the rapidly expanding educational-industrial complex, which already offers numerous careers for the ambitious and well-connected.


From that point of view, I do not feel so interruptive asking Ms. Dowell to back up her argument with the actual data that I can see. What good will the TFA's "quick-fix" fundraisers do for Nashville kids anyway? I've read a TFA alum who argues that it is time for TFA to fold because the money he got did not make him a better teacher. I've listened to a TFA alum who insists that TFA training is like a glorified pep rally more than it is a realistic prep session for teaching troubled populations of impoverished children. And then there is this observation about what TFA actually does, as prompted by complaints from a TFA alum who never got paid for her summer work:

It does seem that Teach for America is coloring reality by promoting itself as an employer instead of a recruiting firm. It is misleading, to say the least. Some might even say it’s dishonest. Certainly it is confusing to recruits who think they are employed by TFA and expect a paycheck.


And there are those not-so-insignificant reports from elsewhere that TFA branches are soliciting philanthropy and charging public coffers to add to their stockpile of wealth whether they actually help the kids or not.


If all TFA donors knew that the money raised is going more to help privileged young adults--on career tracks to politics and other professions--instead of serving underprivileged students through the long arc of their schooling, then could TFA raise the money to bring the former to Nashville? I admit, that is a more significant question than the one currently preying on my mind. My more selfish cogitation is: if TFA Nashville is a temp agency designed like elsewhere to extract veteran teacher salaries from the equation rather than grinding out excellent educators, and Ms. Dowell has the spare time to counter me on the issue of charter schools, then maybe she has a skosh of latitude to share data links that render my view of charter schools indeed as "false" as she claims. I promise not to divert her from the safari too long.
Posted by S-townMike at 4/26/2013 01:42:00 PM