We received the following letter a week ago from a "seismic services" company, which seems to view it as effective communication about blasting that could damage our property: 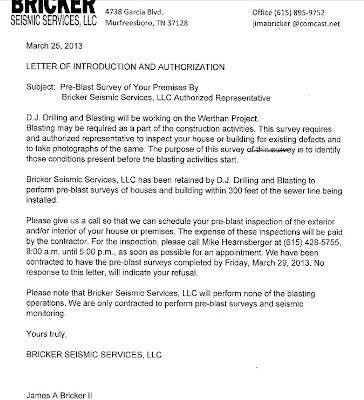 I sent the following email response to Jim Bricker of Bricker Seismic Services and carbon copied CM Erica Gilmore, neighbors who might be affected, the Salemtown Neighbors president, Metro Water, the Mayor's Office of Neighborhoods as well as the Werthan development team at SWH Residential Parters, Smith Gee Studio, and Reno & Cavanaugh:


We received your "letter of introduction and authorization" (see attachment) yesterday, which stipulated that you may be conducting pre-blast surveys of our premises and other properties in our neighborhood based on their proximity to construction of a new sewer line as part of the Werthan development. In it you warn us that you intend to have the surveys completed by this Friday, March 29, 2013.

First of all, I am disappointed that you and the Werthan developers did not schedule a community meeting with us to describe the blasting process, proximity, and possible risks to those of us within 300 feet of the project. I do not recall this ever being brought up by the development team with SWH Residential Partners, Smith Gee Studio and Reno & Cavanaugh in the community meeting they held with us last October, because I would surely have raised these questions. At the very least, you and the blasting company should have sponsored a face-to-face meeting to explain every step of the process to us. My sense is that, if we were a wealthier, whiter neighborhood in Green Hills or West Nashville, then Bricker Seismic would have already done so.

Second, this short timeline is unrealistic--if not ridiculous--for affected property owners to make sure that our rights and interests are protected given the possible risks that have not been adequately communicated by your company. Metro Nashville schools are currently in the second full week of spring break, which means that some affected families may not even be present to get the letter that you left at houses within the affected radius. If you would have dropped this off last week with a similar timeline that ended last Friday, my own family would not have been properly notified because we were out of town and did not get back until after 8:00 pm Friday night. Do you actually know how many residents might be in the same position this week? What about affected property owners who do not live in Nashville? How have they been notified? In your letter, you encourage us to call as soon as possible, but "soon" for some not here may be too late. Frankly, we should have been notified about his demolition weeks in advance by either you or the developers with appropriate lead time to ask questions or seek outside legal advice about our rights in this extraordinary situation. As it is, you do not even give us time to pay for our own independent inspections if we choose to do so.

Finally, you say that you are paying an inspector for pre-blast surveys, which may seem fair on the front end. However, I would like to know how this rises above the appearance of a conflict of interest? What I mean is that you give money to an inspector to produce reports on the condition of our properties; and to whom is this inspector most likely to be obligated? To those of us who are not paying him/her? Or to Bricker Seismic (which pays inspectors now in order to avoid a costly legal future legal process over properties that may have been damage in blasting)? How can we be sure that the inspector you hire is going to be impartial and fair to both sides? There may be a reasonable explanation of honest impartiality in this. However, that should have been stated in a community meeting properly publicized, with a chance for question and answers.

Spray paint marks have appeared on the street in front of our houses indicating gas lines and water mains/lines, which suggests to me that blasting and demolition could come very close to some properties. But we cannot be sure because neither Bricker Seismic nor the development team has been forthcoming about the blasting patterns. Again, I ask you to please extend your deadline and hold a community meeting with affected residents, explaining everything to us and giving people who may not be here a chance to be notified. We also need to know that the inspection process is going to be fair rather than biased in favor of protecting your rights above ours.

If you cannot make more of a concerted effort to be a good neighbor while visiting our community, then we may consider contacting a lawyer in order to protect our rights as clearly as you are protecting yours.


I received no immediate response from Bricker, but within two hours of sending this email, I received the following from John Trill, SWH partner:


Blasting rock is occurs on almost every construction site in Middle TN which is why we did not specifically mention it during the meeting.  I apologize for my over sight. If you would like to schedule a neighborhood meeting to discuss our construction schedule, I am happy to meet. I could meet the evening of April 10th or 11th. We could meet at the community center or the Taylor St. Warehouse on site.  If those dates are not convenient, let me know some other dates that are better.  If we do meet, I would appreciate your help with notifying the neighbors.

Okay, the construction of apartments happens a lot around Middle TN, but that did not stop the development team of this project from pitching this project last fall as a beneficial one for the local neighborhoods. So, why overlook the risks to homeowners? The rezoning was coming up for public hearing and developers put the best possible spin on the benefits for the community with no mention of the costs.

Nonetheless, Trill apologized and seemed to reach out with a community meeting to "discuss" the construction schedule.

At least one of my neighbors who lives a door closer to the blasting area told me she did not receive the letter and she sent me an email from contractor R.C. Matthews Project Manager that said:


I’ve asked our site contractor and his blasting sub to review and advise your on situation…..I’ll keep following up and will follow-up with you.

FYI….we are NOT blasting anytime soon and won’t until you’re fully informed.

So, they promised at least one person not to blast without fully informing. And so, why keep the pre-blast timeline of 5 days in place if affected neighbors who Mr. Bricker did not contact have to be informed? More importantly, why set the deadline before rather than after Mr. Trill's community meeting with us? That is puzzling. 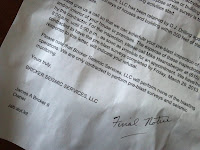 Then last Friday afternoon I came home to find a second Bricker letter with the words "Final Notice" handwritten on it taped to our front door. After having emailed Mr. Bricker 5 days beforehand without a reply and corresponding with the developer to set up a community meeting between affected residents, I considered the "Final Notice" a slap in the face. I tried to call the person whom the letter told us to call between 8-5 each weekday but he did not pick up. I tried to call Mr. Bricker but he did not pick up. I tried Bricker again a few minutes later and he did pick up. He told me that he was considering moving the deadline to next Friday (Apr. 5 at 5:00p), which for me was still not good enough, given the community meeting a week later. Bricker told me that it was not his decision and that the people above him on the Werthan project had already made the decision.

I thought that was curious, given that Mr. Trill had seemed to reach out to offer a community meeting. So, today I raised the question of Bricker's pre-blast survey deadline with him, and I asked him to help me understand the need to continue to contract the survey process to a deadline a week before neighbors had a chance to meet with developers to discuss the process of blasting and documenting any damages. Here is Trill's reply:

I am happy to meet to discuss our construction schedule, which is subject to change. However, we are not stopping construction prior to this meeting. Metro has issued a Grading Permit for the entire site and a Building Permit for the parking deck. The blasting, which is typical for a site in Middle TN, is approved by Metro and approval of the neighbors is not required.  The blasting will be performed in a controlled and professional manner. All blasting will be monitored and if there is damage caused by the blasting the contractor will be responsible which is why they want to document existing conditions.  If there is damage caused by the blasting, the documentation of existing conditions will benefit the Owner of the damaged property because there will be before and after documentation.

So, I'm bound to ask: what is the point of "discussing" the construction schedule at next week's community meeting if affected Salemtown residents are not granted more time to schedule a survey or to consider the option of having their own documentation of damages done? I did not ask for a halt to construction. I asked that the survey company give us a more reasonable amount of time to consider documentation of damages to our property. The pre-blast deadline as it stands is arbitrary and coercive; if we take more time, then developers and their lawyers will respond, "You had your chance, and now it's gone". And they are going to use the Bricker documentation so to serve their special interests.

Otherwise, there is no reason why they cannot extend the deadline until after they meet with us, just like there is no excuse for having neglected to speak with us about the possible risk of damage in the first place and to give us a realistic, rather than self-serving timeline.

I feel like I gave my support to this project too enthusiastically, and these exchanges make me wonder what other surprises the Werthan site development team have in store for us in the future that they are not telling us about now.
Posted by S-townMike at 4/02/2013 11:21:00 PM