Sometimes I really hate having my healthy cynicism about people in power confirmed, but it was this morning. Wealthy real estate developer and owner of the Nashville Sounds Frank Ward just announced the naming rights of the new ballpark at the Sulphur Dell site. The name announced is, "First Tennessee Ballpark, Home of the Nashville Sounds" (named after the bank).

Mr. Ward and First Tennessee seem to have agreed to purge the historical moniker "Sulphur Dell" completely from the official title of the new ballpark. Obviously, the brand won't stoop to bear the historic context of the area adjacent to my neighborhood.

Looks like I was not exaggerating last week (in reporting the demolition of the state fountain commemorating the old sulphur spring that gave birth to a city) when I intimated that developers are willing to wipe away history to squeeze a few more bucks to add to their obscene piles of cash. I keep looking for the ballpark/mixed-use development team to prove me wrong about my concerns with this agreement, but today's announcement is the latest sign that these folks are willing to use our history as a sales pitch to grease the skids of politics, but they are not necessarily serious about embracing it.

We have been told to trust an accelerated process. We have been preached at over and over by Friends of Sulphur Dell, by the Mayor's Office, by opportunistic Metro Council members, by supporters far and wide that building a new ballpark as quickly as possible without proper public process is the best way of honoring the history of our area and the history of baseball at Sulphur Dell. With one morning press conference Metro, the Nashville Sounds and a bank just wiped all of that away.


UPDATE: Couldn't resist broadcasting this little dig at the now extraneous Friends of Sulphur Dell as it appeared on Twitter 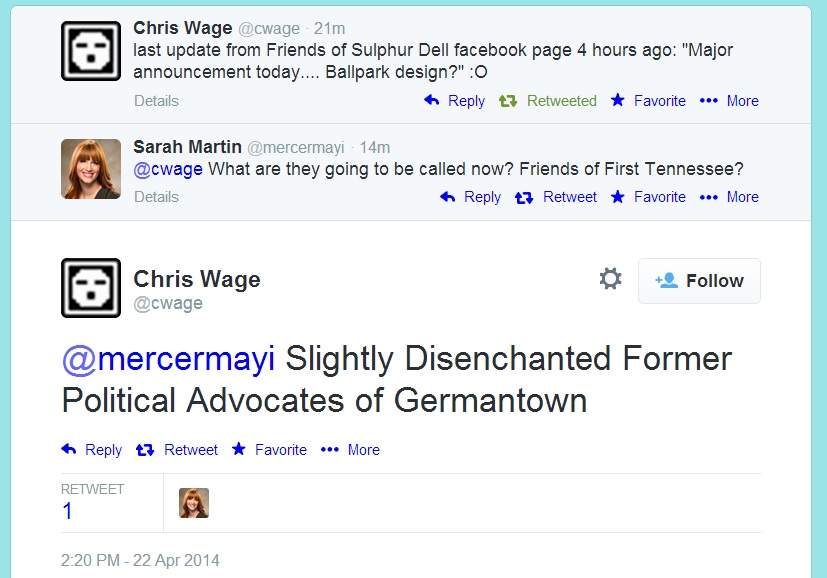 UPDATE: Reporter Steven Hale has a rundown of the questions to ask elected officials and team brass that no other reporters are asking in the wake the ballpark naming kerfuffle. Take note that he cites the comments from Jerry Maynard about baseball "going back to Sulphur Dell". That got me thinking about CM Maynard's other comments employed to get the Mayor's plan passed without proper public input:

In 2008, we formed Friends of Sulphur Dell right here at Farmers Market, with Freddie [O'Connell, president of the Salemtown Neighbors Neighborhood Association, who was standing nearby] and all the neighborhood association and groups,” Maynard said, following the meeting. “And we didn't know if it was going to happen, but we fought hard for Sulphur Dell because this is the birthplace of baseball [in Nashville]. This is where it should be, the neighborhood ballpark.


Reverend Maynard's Sulphur Dell sermons strike me now as hallow and conniving. He has every opportunity now to speak out against the Sounds' decision to exclude Sulphur Dell from the ballpark moniker. I doubt he will say a word against it.

The other thing that strikes me about Hale's observations is how the Mayor places the blame for not leveraging any money for Nashville out of the deal with First Tennessee on the council's vote in favor of the deal:

Mayor Karl Dean's spokeswoman, Bonna Johnson, tells Pith that was part of the deal "just like at LP Field and Bridgestone, and it was in the agreements approved by the Council."


This is not much more than a chicken-shit response from the Mayor's Office. They determined the perimeters and terms of the Sounds deal that was sent to council with the point that any change in terms was a "poison pill" that would destroy it. They set the condensed timeline for approval of the ballpark. They held one community meeting even as Metro Planners promised more than one. They whipped the legislation through the council. They ran the PR campaign from start to finish. The onus is only partly on the weakling council that could not muster a challenge on much of anything to save its life. The Mayor conveniently acts like a strong executive (which is the Metro form of government) when he wants to, but when the heat gets turned up he consistently refuses to take it. Hizzoner's style of governing is to take the credit when it suits him, but to pass the buck when the load starts getting heavy.

The council deserves it's share of responsibility in this stupidity, but make no mistake, the Mayor should assume the lion's share of the blame for any money that could have been made from the naming rights but was lost.

Remember when Mayor Bill Purcell responded to the death of the last Sounds deal by demolishing part of their parking lot to expand a local park? I still marvel at the gumption of that. My sense is that, had he still been Mayor, he would have walked away from this deal with more revenues for public coffers (and even assurances about the Sulphur Dell name) than Karl Dean has.
Posted by S-townMike at 4/22/2014 12:03:00 PM