The president of the league to which the Nashville Sounds belong: baseball is "not in the business of urban redevelopment"

The Pacific Coast League executive appears to be on the same page with professional researchers (who find no objective basis for subjective claims that new ballparks generate greater economic development):

When Branch Rickey [III] talks about what minor league baseball brings to a city, he doesn’t talk about increased property values or the stimulation of downtown entertainment districts. “We’re not in the business of urban redevelopment,” Rickey says. “We would not profess clairvoyance on that front.” He prefers to talk about the fan experience. And when he talks about this experience, he just happens to talk about new stadiums.


From the Friends of Sulphur Dell to Jefferson Street merchants to council members to the Mayor to the Nashville Sounds front office itself, we have seen no shortage of contriving economic impact for North Nashville of this new ballpark. Anyone who has gone all in on this game of chance is doing so on the basis of a leap of faith that Jefferson Street will naturally redevelop due to "First Tennessee Field" (or just a bunch of new apartments to be built around the ballpark).

Some of the merchants and leaders on Jeff St. even seem bent on shoving past any future stage of modest growth of locally owned stores (like those we see around places like Germantown, Five Points and 12South) to large national chains other than the ones already existing on Jeff St.:

Keisha Beard, 48, whose family has owned the property that houses the spa for 90 years, sees the ballpark becoming a reality as a sign that Jefferson Street is ready to join the big leagues. "This is the last side of town that's not been developed," she said. "We're a college street — with TSU, Fisk and Meharry — and don't even have a major restaurant chain here. The students right here need more goods and services."

Sharon Hurt, executive director of community development group Jefferson Street United Merchants Partnership, also welcomes growth opportunities but hopes any projects developers bring celebrate and embrace legacy of the once vibrant economic hub of the city's black community. "I don't want it to become so commercialized and capitalized that we lose the soul and spirit of the community" ....

"We've got Church's Chicken, we've got KFC, and we've got Popeye's — we don't need that anymore," Hurt said. "I would rather see more diversity like Chipotle, Panera Bread and Smoothie King.


This is part of the problem I have with those who dream of economic development: they do not seem careful about what they ask for. I would like to see a thriving Jefferson Street economy, but why not along the lines of an urban village with locally-owned shops and other offerings? Do we really want Jeff St. to boom like West End or Green Hills and their national chains? The charming and popular Magazine Street neighborhood in New Orleans finds itself facing the loss of its local character and struggling with the influx of national chains, which kill the neighborhood vibe.

Is that what we really want for Jefferson Street?

These exaggerated expectations are all part of the unrealistic view of the impact of a ballpark on hyperlocal economy. Hopes around here are irrationally bloated by the prospect of a ballpark divorced from awareness of the risks of new construction.

And yet, even the president of the Sounds' league remains sober enough to acknowledge that new ballpark construction does not increase property values or stimulate growth.

He seems to realize that wishful thinking won't alter reality. And yet, he can still advocate building new ballparks. There are those among us who could learn something from Branch Rickey.


UPDATE: As I update this post at the end of August 2015, Sharon Hurt is involved in a run-off as a candidate for an at-Large seat on Metro Council. She will probably win, which will give her a perch from which to achieve her expectation of chain-store development along Jefferson Street.

Given that August 2015 also includes the 10-year anniversary of Hurricane Katrina striking New Orleans, I have been reading Roberta Brandes Gratz's "We're Still Here Ya Bastards: How the People of New Orleans Rebuilt Their City." From Gratz's perspective, Magazine Street can still teach us about sustainable and smart development along the Jefferson Street corridor without reference to chain-store businesses and big-box stores:


World-famous Magazine Street is a national treasure, a remarkable six-mile stretch that, like the rule-defying traffic patterns of the city streets, contradicts many assumptions about shopping streets. It has rebounded in full force since the storms and serves as the model for shorter, more localized streets where rents are lower. It is the largest of the local shopping streets, passing through several different neighborhoods and attracting shoppers from out of town as well. This shopping street evolved without big plans, large developers, or cookie-cutter formulas. 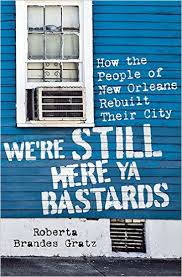 In the 1950s and ’60s, when the car became more important than the pedestrian, many cities turned their primary shopping streets one-way—yet another of those mid-century trends intended to speed car traffic, to which New Orleans did not succumb. Only minutes from the central business district, Magazine is a two-way traffic street with only one lane each way, giving the street an intimate feel. Metered parking spaces line both sides. Pedestrians cross comfortably. Cars coming from the side streets edge across carefully without the help of traffic lights. Major thoroughfares with traffic lights cross at half-mile intervals. These are the signature New Orleans boulevard-like streets with two lanes of traffic each way separated by a median—the “neutral ground,” which is landscaped differently in each neighborhood. In its entirety, Magazine Street epitomizes what [Jane] Jacobs describes as a “close grained diversity of uses that give each other constant mutual support, both economically and socially.


Many of us believe that Jeff St is a Nashville treasure, but it can be more with community-based planning and development instead of the relentless eradication spurred by unchained growth under market forces alone.

Gratz also cites a 2009 study that included data from Magazine Street. The study concludes that locally business generates twice the sales of big-box stores and recirculates twice the revenue as that recirculated by chain stores in the local economy. I have no doubt that college students with their limited perspective of Jeff St history would enjoy more chain stores (with which they are acquainted) along the corridor. I have no doubt that Ms. Hurt, if she becomes a council member, will lobby the Mayor's Office to give tax breaks and other corporate welfare to national companies so that they will flip Jeff St into West End Av. That would be a total waste of an opportunity to help local businesses generate an economy that would recirculate resources back into our North Nashville neighborhoods at a faster clip than Target or Chipolte could. It would also be a total waste of the chance to instill the pride of supporting smaller-scale, locally-owned businesses.
Posted by S-townMike at 4/25/2014 03:08:00 PM