Metro Council hands Gulch businesses a new 700-foot luxury sidewalk at the price of over $25,000 per foot

Do you feel connected now, Nashville? You should, because the Metro Council authorized Mayor Karl Dean to spend $18,000,000 on a sidewalk ("The Gulch Pedestrian Bridge") under the pretense of "connecting Nashville." If you live in Madison or Antioch or West Nashville and you don't feel connected, well maybe ye place little faith in the words of 2015 mayoral candidate and at-Large CM Megan Barry, who defended her vote by saying that "connecting Nashville" is a "necessity." Dropping $18,000,000 on a sidewalk in a neighborhood that has sidewalks is now "a necessity."

Here is how CM Barry and everyone else voted last night with absolutely no debate for that much money to spend: 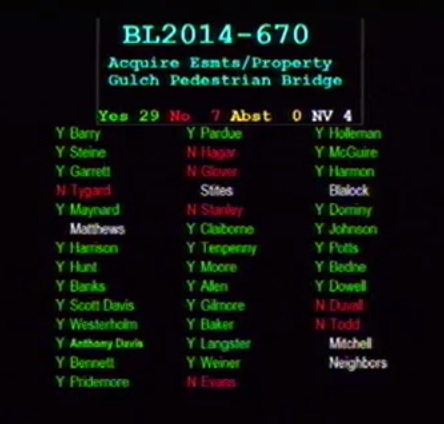 We are as a body amongst the most responsive elected officials in the country, and that's one of the things that's special about Nashville .... this council is the great weather vane of this city. Every possible opinion in this county/city is reflected in this body at one time or another .... All positions and opinions are heard .... If you look at the quality of work in this council, it's high quality. We get hammered because we agree with the mayor sometimes .... When we agree with him on an issue .., we're not rubber stamps. We're all just reflective of what this community is working on.


Is a luxury sidewalk that connects the Gulch to downtown entertainment venues reflective of what Nashville-Davidson County is working on? Or do our communities advocate spreading the wealth equitably so that sidewalks in all communities benefit from the Metro tax base?

Keep in mind that the council approved the Gulch bridge plan only after Karl Dean committed to spending $17,000,000 in other neighborhoods on sidewalks. Not $17,000,000 per neighborhood, but spread out between competing neighborhoods. That is interesting math: for one 700 foot sidewalk, the Gulch gets $18,000,000. Everyone else gets to fight over and divvy up $17,000,000.

It seems to me that the Metro Council deserves all of the "hammering" it gets for rubber stamping the mayor because it does it dramatically more than "sometimes." Otherwise, please show me a vote against one of Karl Dean's major capital projects that either CM Steine or CM Barry has taken. With the controversy and contentiousness over the Gulch pedestrian bridge, with the blatant inequality of spending more on downtown infrastructure than in places that do not even have sidewalks, these council members had cover to vote independently, but still they chose to rubber stamp Hizzoner.