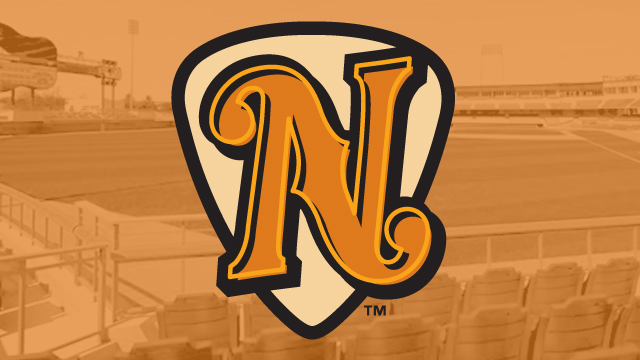 Nashville Scene sports reporter, J.R. Lind, has some insightful analysis on attempts to rebrand the local minor league baseball affiliate, Nashville Sounds. Of interest to those of us living in North Nashville are J.R.'s observations about how the entire recoloring and relogoing move continues to snub our neighborhoods:

Despite all the bloviating about the historical importance of he Sulphur Dell site, the Sounds have done very little to actually emphasize the history they are trying to co-opt. Most glaringly, the new stadium won't bear the name "Sulphur Dell" — naming rights' deals are a reality, I get it, but is it impossible to have called the new ballyard "First Tennessee Park at Sulphur Dell"? And now the team's color scheme will allude to a tourist strip more than a mile away rather than the neighborhood that's in the shadow of the stadium, the neighborhoods that are being directly affected (for good or ill) by the stadium?

Why, it's almost like "Jefferson Street" bears some kind of connotation the Sounds don't want to be a part of, even though the long-shuttered R&B and jazz clubs along Jefferson were Nashville sounds too, even if they weren't the Nashville Sound™.

It's as if the North Nashville neighborhoods that will spread out beyond the outfield walls of First Tennessee Park are something the Sounds are trying to ignore or are ashamed of. Instead, the Sounds want to further bury the history of the site and use the neon on Broadway (or its apparently-ubiquitous burnt orange) to market the team.

So who are they actually marketing to? Touristy bros and bachelorette parties for whom Lower Broad is the be-all and end-all of Nashville and suburbanites who are far more comfortable with exposing their families to Broadway with its puking twentysomethings at honky tonks than whatever they think happens in North Nashville.


I have argued through this rebranding process (starting with council approval of the ballpark and ground breaking) that I believe that we should be judging team ownership by their actions toward the community.

They lobbied council for a new park without ever dealing directly with neighbors in community meetings. Frank Ward, who is the most visible bigshot of the ownership team, referred to engaging the community as "politics", which he would not participate in (so, he hired a lobbyist to do his dirty work). And we should never forget the infamous history of mistreatment and neglect of predominantly African American, working class North Nashville, which carries over today in more subtle ways. The shameful handling of the community planning process by the Sounds and Metro government is a legacy of that history as far as I am concerned.

So, yes, Jefferson Street absolutely does have cultural connotations that the Sounds do not want to be a part of.

In other transactions, Sounds' owners treated their now former parent major league team shabbily as part of the rebrand process. The Milwaukee Brewers waited patiently over the span of a decade for the Sounds to come to an agreement with Metro on a ballpark deal. The Sounds gave no indication that they would flip affiliation to the Oakland Athletics, but abruptly did so last month. During the span of Brewers-Sound affiliation, Oakland had 1 more playoff appearance than the Brewers did. There has been grumbling in Sacramento, Oakland's previous affiliate about declining game attendance numbers. The Sacramento River Cats preferred to go with the San Francisco Giants (which should leave Nashvillians wondering, "If Oakland is such an attractive club, then, why, Sacramento, why?")

For his part, Brewers General Manager Doug Melvin, a man with a storied reputation for player development (which has been great for his minor league affiliates over the years), says that he offered the Sounds exhibition games and financial incentives to keep the affiliation going, but he was ignored by the Sounds' brain trust.

Parenthetically, the minor league team seems intent on hitching to the celebrity of Oakland GM Billy Beane, who was portrayed by Brad Pitt in 2011's critically-acclaimed and popular film, "Moneyball". Billy Beane also has an outstanding track record on player development. However, in 2014 Mr. Beane acted more like he was the GM for the New York Yankees, trading top-flight talent in the Oakland system, like Billy McKinney, Addison Russell, and Dan Straily away for rent-a-players and win-now major leaguers. Despite giving away the farm, Oakland did not win with those trades. In fact, their season-ending collapse was one of the most spectacular in the history of their division. Billy Beane may also have traded away Nashville's future success and he came away with not a single postseason win for his trouble.

But boosters of the flip to Oakland act like this means Nashville is going to see more of Brad Pitt around the city now. We're more likely to see some mediocre baseball first. We shall see if that will be enough for ticket holders.

In all of this I see the same pattern: the Nashville Sounds ignore stakeholders affected by their self-absorbed financial decisions. They seem to make insular decisions and only pull in the powerful people who can activate the plans. This does not bode well for neighborhoods near the ballpark like Salemtown.

Back to the Nashville Scene piece that prompted this post: after J.R. Lind posted his analysis yesterday, Jason Franke, the Sounds' Vice President of Corporate Partnerships and Marketing tweeted snark at it: 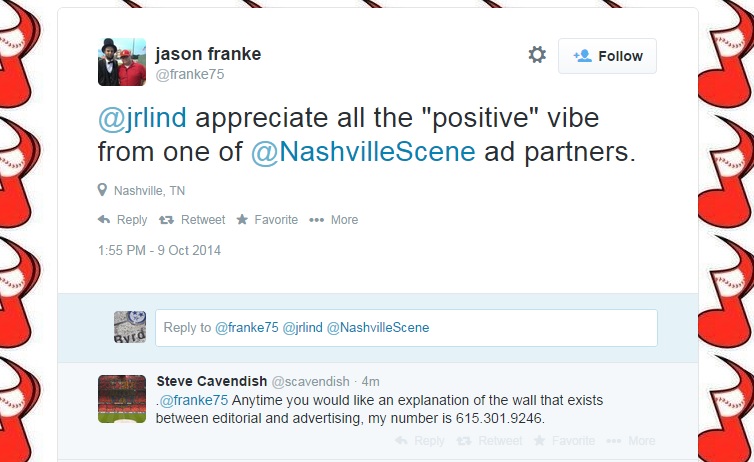 Not only do Frank Ward and the Nashville Sounds act like they believe that they are entitled to do anything Metro Nashville powers-that-be and minor league rules will allow them to do, but they act like they believe they are entitled to unquestioning support from "partners," even in the news media, where a different set of ethics rule. Mr. Franke's response to the Nashville Scene was manipulative and arrogant.

There is not much the community can do to knock team insolence down a couple of notches (which it does indeed deserve), but we should brace ourselves for future dealings with the Nashville Sounds over quality-of-life issues that they generate in neighborhoods proximate to First Tennessee Park.
Posted by S-townMike at 10/10/2014 12:37:00 PM