I asked the Tennessean to stop throwing papers at our house. They did it anyway. On Christmas Eve.

Back in early November, I pointed out to our council member at-Large Megan Barry that the local daily newspaper was not ending littering Salemtown with its advertisements each Wednesday as she suggested they would back in June. The Tennessean social media person responded with contact info to stop delivery. 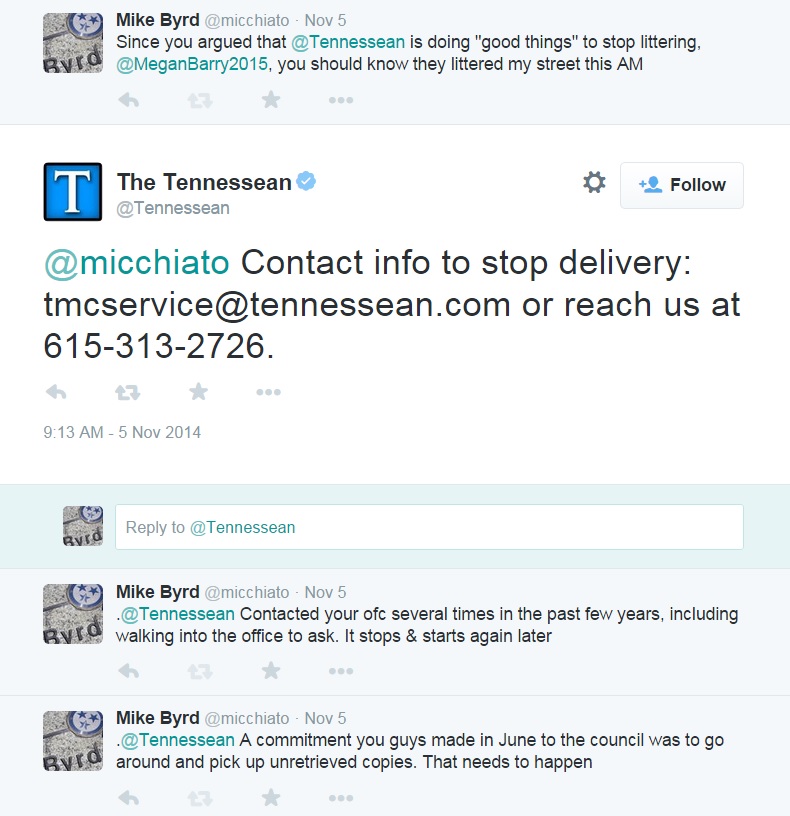 Despite my cynicism (expressed above) that the Tennessean would actually change their established pattern of ignoring my stop-delivery requests, I emailed the "tmc" account provided and asked them to stop Wednesday delivery.

For my diligence, this morning we received another unwelcome gift from a Tennessean delivery drone: the plastic-wrapped "free" Wednesday advertising edition of the Tennessean.

As the littering of Salemtown continues without any options to stop it, thanks to Metro Council elves, I recall CM Barry's argument on a warm June night for leaving the Tennessean alone to do what it wills:

The conversation [about controlling the unsolicited litter dumps in neighborhoods] has led to some really good things that the Tennessean is doing .... tonight I am going to go ahead and say, “Let’s just put this to rest” and I’m going to vote against [stopping unwelcome litter in neighborhoods].


What Megan Barry helped put to rest last June was any chance you and I have of controlling a vast polluting, dead-tree corporation that is more of an advertising agency than a news source. Is it because the Tennessean stands to provide her mayoral campaign with the kind of advertising (masquerading as journalism) she could not buy? That I cannot say for sure, although it stands to reason that not rocking the boat minimizes her risk of media hits and broadsides.

However, only an Orwellian can argue that dumping dozens of rolls of unwanted paper within a community trying to keep its streets cleaned up is a "good thing."
Posted by S-townMike at 12/24/2014 12:12:00 PM