Marshaled by mayoral candidate Megan Barry, the council refuses to discuss any downside to the Bridgestone dealio

In October CM Megan Barry characterized the problems that uneven growth causes in places like North Nashville as "growing pains" completely ignoring the historical prejudice and systemic flow of resources away from our neighborhoods. By minimizing the collateral shambles and planned blight caused by growth, she ignored how North Nashville has perennially been treated as a dumping ground for wealthy Nashville's refuse and as new territory for white settlement after real estate prices bottom out. Her answer to the "growing pains" is "transportation and affordable housing." Ironically, her last significant transportation vote as council member was to fund that $18 million sidewalk, exclusively serving downtown, while some Madison children walk to school in the street. Has she considered the limitations of calculating what gets called "affordable housing" in gentrifying neighborhoods? 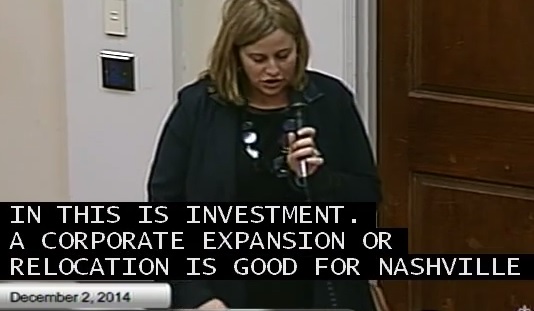 Last night she also made clear that another option she would favor as mayor would be more of the same untamed corporate sweetheart deals that Karl Dean has become a rock star at ginning up while benignly ignoring North Nashville:

By turning this parking lot into a permanent [Bridgestone] fixture in the Nashville skyline, we are moving Nashville forward .... We are going to keep 1,100 Nashville jobs, but we are going to add 600 new jobs in Nashville with an average salary of $93,000 in which it increases our tax base for schools, for transportation and for public safety .... Let's be clear this is not a corporate giveaway.


Ms. Barry went on to soft-pedal one of the more alarming aspects of Dean's deal: Bridgestone can lay-off up to 20% of the 1,700 people it promises to deliver without losing its tax-free status with Metro. She said that "if Bridgestone fails to deliver" 1,700 jobs by the end of 2020, Metro can "claw back" a fraction of the taxes owed. But Bridgestone is still given leeway to shed 20% of this workforce and still be exempt from property taxes. The Bridgestone boosters are not being entirely honest about the risks of this deal. As one reporter put it, "Council members stayed away from discussing any possible downside to the Bridgestone deal."

The Orwellian dimensions of council supporters' comments about the Bridgestone deal are staggering. Bridgestone is not obligated to create any new permanent jobs. The company is praised for importing 600 out-of-state employees, but it can shed over half of the 600's filled positions and still keep its tax break. Supporters also tout Bridgestone's pledge to donate $150,000 to Metro schools. $150,000. That's it. They're getting a $56,300,000 hand-out from Nashville, and they're only pledging $150,000 to our schools, which I assume they can claim on their tax returns. Yet, in CM Barry's words, "this is not a corporate giveaway."

Another Orwellian moment was CM Barry's claim that the new Bridgestone building would be a permanent fixture in the Nashville skyline. Backing her up, CM Erica Gilmore said the HQ would "forever change" the skyline. The only real constant with regard to buildings in Nashville is that older ones are torn down to make room for newer ones, regardless of the history or need to preserve what is important to people here. Anyone who claims that there is permanence in Nashville's built environment is acting misleadingly and dishonestly. A new building downtown may be here for a long time, or it may give way to some future capital project subsidized by the mayor and ballyhooed by a blustery council.

Megan Barry is right about one thing. The new Bridgestone HQ is going to be a fixture, permanent or not, on the Nashville skyline that many will be able to see. Many in North Nashville who will never have the opportunity at any possible living wage jobs Bridgestone might catalyze will see it, too. And that is as close as they are going to get to the sense of entitlement downtown. The Bridgestone HQ sits on a far horizon for most of those who work their livings in this town. Average North Nashvillians will not be enjoying those $93,000 jobs even if the projected taxes on them eventually trickle down here and there like crumbs from the master's table.

And Megan Barry will continue to minimize the growth-induced plight of working people as "growing pains" that are somehow necessary when a city barters away its corporate tax base due to the Courthouse terror that companies might plead poverty and abandon it.
Posted by S-townMike at 12/03/2014 12:57:00 PM