Is this Salemtown development designed for people or for cars?

Over the past year--whether concerning a new bus rapid transit line or an $18 million pedestrian bridge--the Mayor's Office has drummed into our heads that the strapping millennial generation is different than others in that they want more walkable neighborhoods and more mass transit. In short, they don't care for cars.

What's good for public dollars ought to be good for private dollars, too, so why is Dale & Associates builders planning a high-density build in Salemtown with what looks like parking for at least 40 cars? New builds are marketed to millennials who don't subscribe to car culture (unlike baby boomers), so why do these the developers of "The Row at 6th and Garfield" plan to pave/build over what looks like about 80% of the land across 5 properties?

It seems brash enough to demolish 8 units across those 5 plots and build 20 in a neighborhood zoned mostly for medium density. However, I can grasp the logic that the urban core is going to become more, not less dense over time. What I fail to appreciate is taking out what are currently modest rentals that accommodate working-class folk in are increasingly being pushed out of Salemtown. What I fail to fathom is why one more project is being built for upwardly mobile millennials, with no mention of affordable options to hang on to diversity. What I fail to respect is the idea that the space will be more devoted to servicing cars than people; in an age where we are told that millennials are giving up their cars.

Some in the new urbanist klatch refer to this corner as the "last remaining corner at 6th and Garfield," even as it continues to be occupied families with children. Part of the problem with the gentrifying mindset it that it renders people of modest income invisible. The more profound attribution to me is that if The Row at 6th and Garfield is built as currently planned, then the last patch of considerable green space at this intersection will be paved over. It is not uncommon to see children playing on the grassy areas whenever I pass this intersection.

The builders of each of the other three developments (one is Dale & Associates) at the intersection took vacant lots with nothing but green space and built town homes with completely paved car ways in the back. They left thin slivers of green space ringing each of the developments. So, The Row at 6th and Garfield would complete the trend of orienting intersection completely to car traffic regardless of environmental and stormwater run-off impact.

In my opinion, it is unwise for Salemtown to support to the idea of parking for 40 cars in one development. We need to ask the developers to scale down their build more practically for the people they are marketing to. Why not double the number of units from 8 to 16 and reduce the number of car provisions to 32 (or less since millennials don't prefer cars)? And they should be required to include affordable housing components in the project.

If the men of Dale are going to ask for our support in their bid to maximize land owners' investments, then they should be willing to give something back to our community.


UPDATE: I took a photo of the MTA bus stop closest to the properties where The Row at 6th and Garfield would be built. The blue sign marks the stop. The red brick duplexes in the center background of the photo are the properties in question. We are talking about a few dozen feet to walk to catch a bus that runs straight down 5th Av N to downtown's central station in around 5-10 minutes (yes, I have picked up a bus there before), where other buses can take riders anywhere in Nashville. 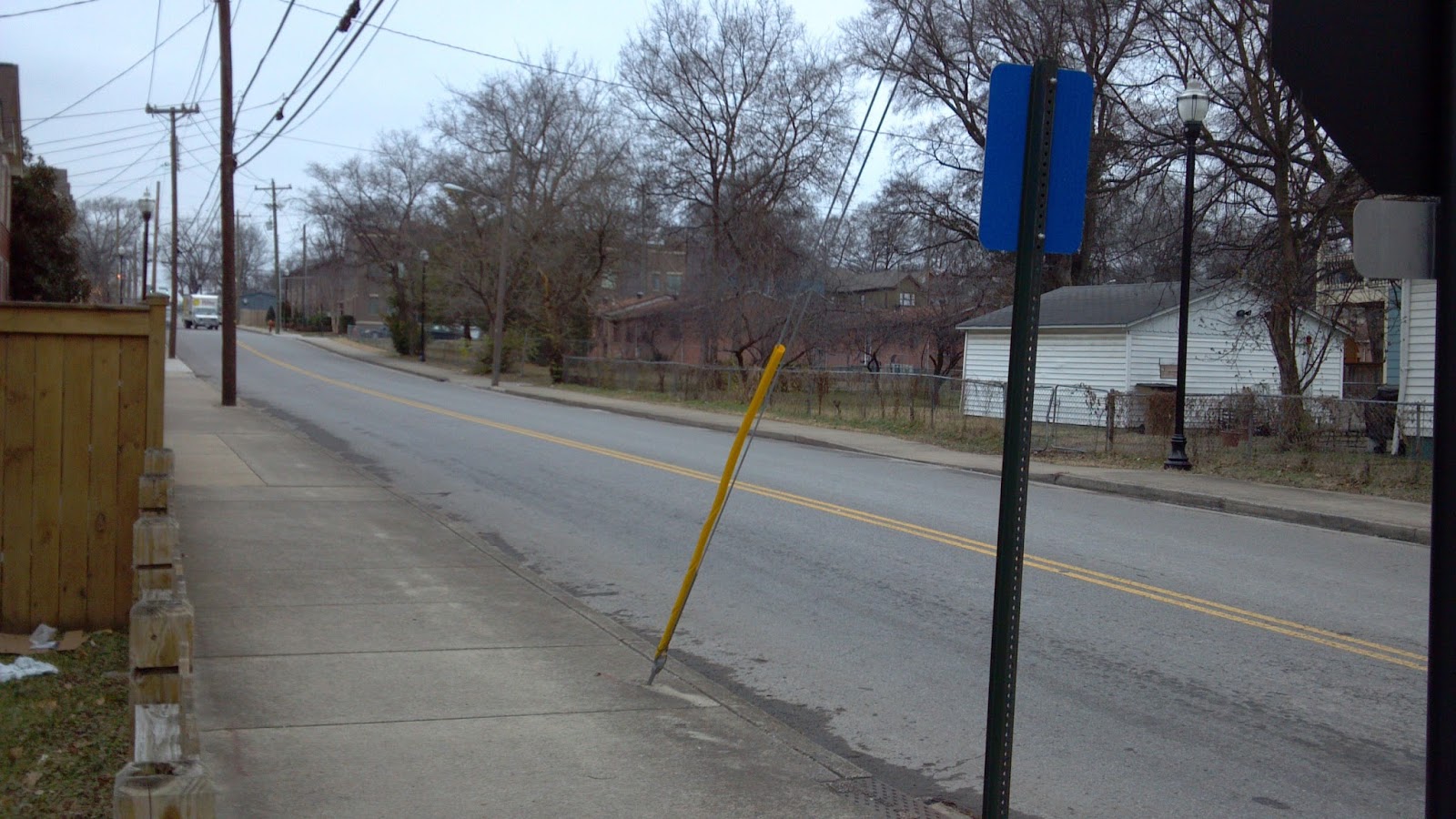 Again, if mass transit is a comer with potential buyers, and they do not have to walk even a block to access mass transit, why should developers include 40 parking spaces at The Row at 6th and Garfield?
Posted by S-townMike at 12/15/2014 12:19:00 PM