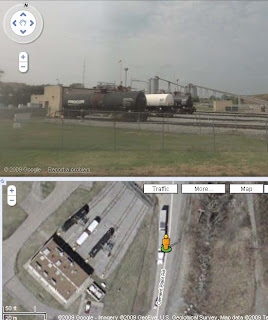 Three years ago, NewsChannel5 exposed the hazardous risk that Metro Water Services was posing to its neighbors by storing chlorine in tanker cars out on open ground protected by little beyond a security guard and a chain link fence. More recent Google satellite/streetview photos show that regardless of concerns about toxic and deadly chemical spills that could result from catastrophic weather, an accident, or domestic terrorism, endangering those of us who live proximate to the Central Wastewater Treatment facility, Metro government still continues the practice of using and haphazardly storing chlorine.

A few weeks ago, Greenpeace listed the Central Wastewater Treatment Plant among the chemical facilities posing higher risks to Tennesseans when safer chemicals for water treatment are available. Greenpeace environmentalists mentioned both chlorine and anhydrous sulfur dioxide as the harmful agents used by MWS. While the threats to Nashville of a catastrophic spill of these chemicals into the environment are real enough, we began to be concerned about possible connections between cancer and exposure to chlorine after my wife was diagnosed with thyroid cancer about a year ago.

According to the EPA there is some evidence of a connection between some forms of cancer and "chlorination byproducts in drinking water." However, several of the government websites I looked at report that no study has conclusively found a connection between human cancer and chlorine. On the contrary, there is a theory proposed by experts in the food, environmental, and health sciences called the Bromide Dominance Theory that postulates a connection between bromide, which is in the same chemical family as chlorine, and thyroid cancer. According to the theory, bromide displaces iodine in the body, and the resulting iodine deficiency leads to an increased risk for thyroid cancer (among others). Likewise, if chlorine also displaces iodine, could it also increase the risk of thyroid cancer? Could Metro Water's use of chlorine in our drinking water increase chances that people with family histories of cancer will get cancer?

I'm obviously not qualified to answer those questions, but I do want to relay a sobering experience I had shortly before the Greenpeace report on our wastewater treatment neighbor came out. Our plumber came by for a regular inspection of our water heater. He also suggested a chlorine test for our tap water. He performed this test by pouring three glasses of water. Using a simple pool test kit, he put 5 drops of chlorine testing agent in the first glass and stirred it with a utensil. The water turned bright and then then deep yellow, matching the highest level of chlorine on the pool kit spectrum. Next he put the same 5 drops of agent in the second class and stirred it with his finger. The water did not change as he stirred and even after a minute was still clear. He then poured the third glass into the second and it almost immediately went yellow again. He told me that we have an extreme level of chlorine that we were exposing ourselves to daily. He also noted that if his skin soaked up chlorine from room temperature water, then our hot showers could be opening our pores to the highest levels of chlorine exposure.

I have no delusions and I know that it is in our plumbers' financial interest to show us high chlorine levels in our tap water. We are going to buy a trunk line filter to protect ourselves from Metro Water Services, but the chlorine test was merely the final straw. However, in the end, families should not have to make the choice between exposing themselves to the financial risks of retrofitting plumbing and the health risk of bathing and consuming hyper-chlorinated water.

Above all, Metro Water should not be exposing Nashville to catastrophes on a mass scale by continuing their use of these chemicals if less hazardous methods of water treatment exist. Instead of spending Metro's capital budget on new convention centers, wouldn't the money be better spent in detoxifying Metro's water treatment process? What could be saved in passed-on medical and insurance costs might pay for more than just a new convention center.
Posted by S-townMike at 9/09/2009 10:32:00 PM