CMA Music Festival relies on volunteers, but what about the jobs? 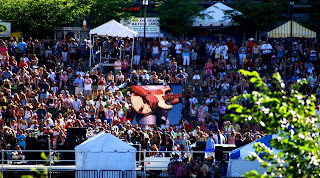 It is noble to volunteer time and energy to projects that serve the Nashville community. Many professional musicians donate their performances at the CMA Music Fest so that proceeds can be donated to Metro Nashville Public Schools music programs. That is a good thing. According to the Country Music Association website, the volunteer hours donated also flip into more money donated to MNPS "Keep the Music Playing" project, which began in 2006.

WPLN reports that at 2012 CMA Music Fest (41st Fan Fair), more volunteers than ever are being used instead of paid staff:

More than sixty-thousand country music fans are expected to jam downtown Nashville each of the next four days for the CMA Music Festival. Hundreds of volunteers will be helping with crowd control and manning information booths.

For the past three years, the Country Music Association has reduced its paid staff at the festival and shifted some responsibilities to volunteers.


The nobility of volunteer actions should not trump critical questions concerning how volunteers are being used. And I have a couple of questions, which I have not been able to find answers for yet, because I have not located CMA's financials either on Charity Navigator or Giving Matters.

First of all is there a one-to-one match between each volunteer and the actual salary a staff member might be paid to perform the same work? If there is not a direct match, then volunteers should be told that not all of their "donation" will be going to school music programs, but to help CMA's cash flow.

Second, I recall past reports on the economic impact of CMA Fests (economic impact reports are not always the most objective tools, by the way) that claimed that they generated local jobs for many Nashvillians. If increasing numbers of volunteers are being used to reduce the paid staff, that suggests to me that the local labor force is not deriving the promised benefits. There is nobility in volunteering and there is nobility in working for wages.

In my opinion, CMA cannot both claim to provide a remarkable number of jobs for people who need jobs and rely on increasing numbers of volunteers while reducing staff without losing some credibility. Even the nobility of voluntarism cannot stand in for unrealized promises of employment.
Posted by S-townMike at 6/08/2012 06:01:00 PM