Because the "Music" in "Music City" is defined narrowly by Nashville


Last year I braved the unrelenting heat and the threat of severe storms to catch several shows at the National Folk Festival held at Bicentennial Mall. The international scope of the music was significant, but it also suggested commitment of the Courthouse class and the business "community" to the development of North Nashville.

Apparently, Nashville's will to branch out and pull in all kinds of music, build an event with a view to long-term growth and likewise support the North End is feeble:

The National Folk Festival set to happen in Nashville this September is cancelled. One official blamed what she called “timing problems and acts of God” for sabotaging the event last year, and leaving it in debt. Now the festival hopes to regroup for 2013.

The National Folk Festival moves from city to city in three-year stints. Nashville beat out dozens of competitors when it won rights to host the festival from 2011 to 2013. But barely a month after that announcement, the city flooded. Organizers say the result was a huge setback for planning and fundraising. 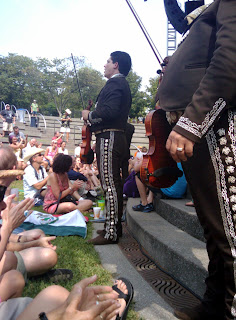 Another report underscores a corporate community that looks less than bold. The flood was blamed for the anemic fundraising. However, recall how nobody thought twice about the necessity of moving forward restlessly with country music's big Fan Fair event weeks after the 2010 flood when we were still drying and and trying to recover.

There is no doubt that CMA brings in millions for the local tourist industry, but you would think that a corporate community would use its windfall from guitars and fiddles to broaden our global horizons by encouraging diverse forms of music in Music City. And where better than in North Nashville, which could use these events, even if they do not deliver CMA's bang for the buck in the Downtown commercial areas?

From small things big things one day come. But they will not be coming with the help of the National Folk Festival, because Nashville has apparently made up its mind that only a narrow-band of popular American music is good enough for us. And this embarrassing failure also shows that the powers that be are not as interested in the development of North Nashville as they tell us they are.
Posted by S-townMike at 7/16/2012 11:04:00 PM