On the question of saving Salemtown's trees

On Friday I made the observation that old growth trees falling in extreme weather like we continue to have over the past few years in North Nashville has become almost common place. After high winds blow through, I usually hike around the hood with my camera because I can generally find damage here and there. The photos posted here show some of the disaster people have experienced due to weak trees and strong storms. We have had arborists from several local tree companies in to diagnose diseased trees and to clean up others knocked down in storms. I have yet to meet one who is optimistic about the chances of the neighborhood's oldest trees.

I found out that one developer, Jim Creason, has been catching heat from some of the residents here about old growth trees he cut down at his development at 5th and Garfield. I have yet to find a developer who when faced with large trees on their lots has not opted to cut them down. I am rarely accused of supporting developers, but in the event I would be, let me start by saying that any responsible developer would ask professional arborists to evaluate the health and condition of old growth trees on their property before cutting some of them down.
As best I can tell, that rarely occurs. Developers usually take down whatever they want to. But responsible developers should try to save every part of the healthy canopy that they can. If saving their trees is beyond hope, they should broadcast the arborists' conclusions to concerned neighbors.

As I understand it, Jim did have a Metro arborist in to evaluate the large trees on his lot. That professional told Jim that the trees were beyond saving. He tells me that it was not good enough for neighbors who kept on him to keep the trees up even though he risked damage to his buildings in extreme weather. It seems to me that concerned neighbors should bring in their own arborists to evaluate the trees if they are not happy with the justifications a developer gives. But arguing that trees should be kept up just because there is something unquestionably good about trees without regard to their condition and risk of falling is naive.

While watching a large tree cut down is a harsh reality to accept, it is not unreasonable for neighbors to request that developers plant a hardy, indigenous tree for every sick and weakened tree that they feel led to take down. The best developers will acknowledge their responsibility, even in higher density urban builds, to go the extra mile to fill in the holes in the neighborhood canopy. When Jim told me about this altercation with others, I asked all of these questions about him fulfilling his responsibilities, and he addressed my concerns to my satisfaction. A few days after our discussion the large tree caddy-corner to Jim's 5th and Garfield property blew down on a home. I don't believe that trees coming down justify any developer's clear-cutting property, but I do think if the nice old tree had been judged to be ill or frail by an arborist, I would certainly understand the owner taking it down.

And I say that as a property owner who last year had similar damage to my home by a storm-tossed old growth tree that once had been an attractive edition to our yard. Sure it cost us thousands to repair our house, our fence and our back yard, but we were lucky that no one was hurt by the disaster. I would like to save all of the healthy trees that we can, but not any cost to our personal lives. We will continue to have pros evaluate the health of our large trees, but whenever we have an old tree that literally hangs over us waiting for the next strong gale to fall, we will take it down without any apologies to anyone else for our prudence. Moreover, we will replace what we take out with better trees. I expect no less or no more from developers.

UPDATE: Sunday night's round of storms over North Nashville brought down another tree. Ostensible roof damage to a home on 5th Avenue near Garfield, and perhaps minor damage to a car parked in the street in front: 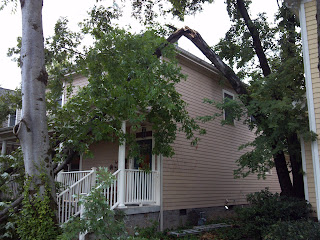 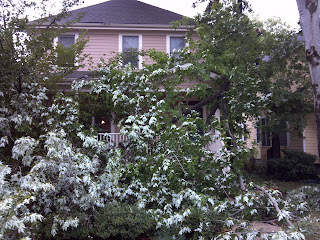