The hemorrhaging of strong writing continues in the traditional news media.

On the one hand, the Nashville Scene reports that the Tennessean just lost their best investigative journalist, which is sad since the Tennessean rarely bothers investigating much of anything any more. Tough questions are left to be asked by outsiders.

On the other hand, the Tennessean's business section has an intern running down stories and writing copy. Part of that copy regarding the AOL founder's recent visit to Nashville's Entrepreneur Center was "mistaken":

To get government funding to renovate these buildings, the Nashville Entrepreneur Center raised funding from private sources and then asked the city to match this funding instead of asking for city funds first.

"(That made it) an easy yes for the mayor," Burcham said, "because there was no risk involved."


To their credit, the Center quickly responded when I tweeted about the intern's mischaracterization of the history of Nashville's historical buildings: 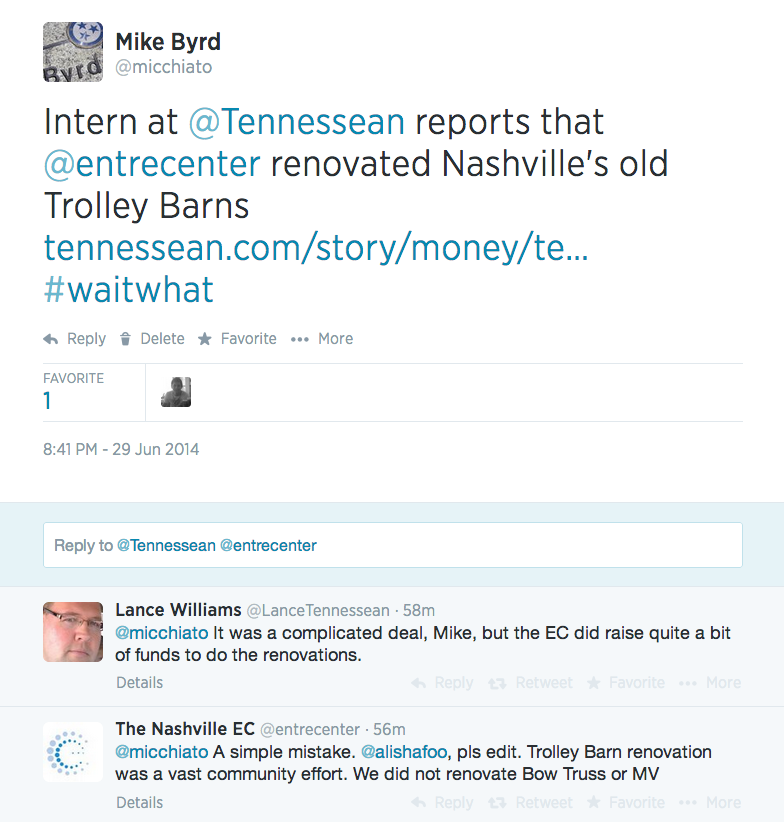 The Tennessean's business section editor came to the defense of his intern saying that the center did raise a lot of funds, which is not the same thing as getting millions in federal aid, a new office above the 2010 flood stage from Metro's own powerful real estate broker (MDHA) and a lot of help from the Mayor's Office. Government seems to have had as much to do with the renovations (not excusing them for their decades of inexcusable neglect of the trolley barns) as did the Entrepreneur Center itself. It seems like a seasoned reporter might have recognized that, and been less likely to leap to the conclusion that EC did it all (as well as Marathon Village renovations!)