I find it interesting that the Land Trust for Tennessee is promoting a belated announcement of "Nashville's Open Space Plan" Thursday morning with Mayor Karl Dean. It is interesting enough that a high profile Bredesenista was brought in to get this project back on track. But even more interesting to me is the tension between the concept of open space promoted at the Land Trust's website with a picture of Adelicia Park, a gated park only accessible by residents of Midtown's swanky high-rise, "The Adelicia." Celebrity and penthouse luminary Taylor Swift has access to the park, and The Adelicia promotes its "open" space as their residents' own "idyllic escape" and a private space of "exclusivity." 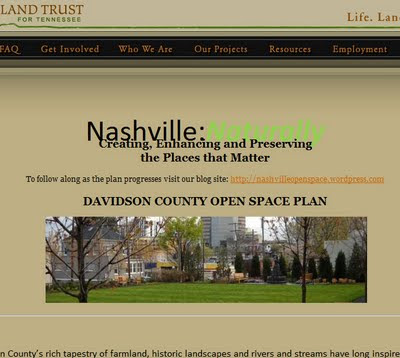 While Mayor Dean is appearing for Thursday's announcement at very public Shelby Bottoms, he also appeared for the Land Trust's dedication of Adelicia Park in 2008. Given the Mayor's preference for privatizing public resources (see school custodians, charter schools, the Fairgrounds, and disaster relief), his favoritism for restricted "open" spaces is not a surprise to me.

But I wait to see what he or the Land Trust have to say in Shelby Bottoms about dedicating public, non-elite green spaces, literally open to all Nashvillians.
Posted by S-townMike at 4/12/2011 10:03:00 PM