Some of us have been raising red flags about negligible transparency in the Mayor's Office on a host of other issues (disaster response, education, Fairgrounds redevelopment, etc). Those of you who have been keen to the inappreciable openness should check out the third paragraph of CM Gilmore's letter to Karl Dean and prepare yourselves for the non-shock: 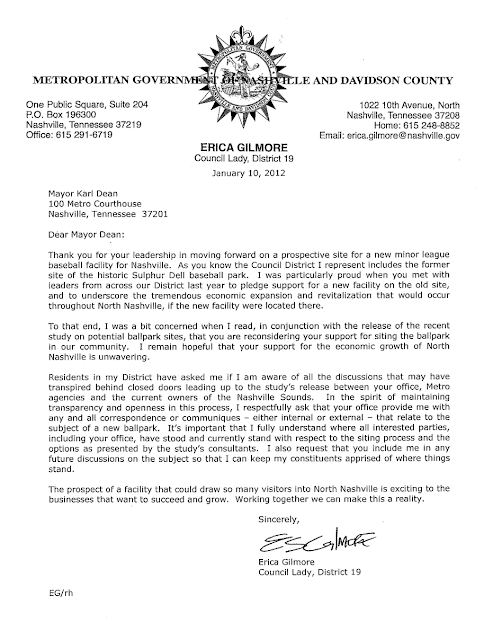 UPDATE: The Nashville Business Journal received a response to CM Gilmore from the Mayor's Office:


Dean press secretary Bonna Johnson said the decision on where the ballpark will go will depend not only on economic impact — the focus of the Populous study — but also the ability of Metro to acquire one of the three sites.

And that decision, Johnson said in a statement, will come after the administration decides whether to build a ballpark, for which there are “no firm plans.” A key part of any plan, she said, would be private participation by the Sounds in any financing deal.

“While we appreciate Council Member Gilmore’s input, it must be noted that we are a long way from deciding on a site for a ballpark,” Johnson said ....

On the issue of supporting north Nashville — a key aspect of Gilmore’s complaint — Johnson said the mayor has backed a number of public projects that benefit that area. The ballpark decision, she said, will “depend on what is best for the city as a whole.”

Wonder why the Mayor didn't respond to the CM's point about the need for more transparency and openness? So, the decision is still going to be staged on the closed set of the Mayor's inner sanctum, far from the madding crowd's ignoble strife? (Apologies to Thomas Hardy).
Posted by S-townMike at 1/12/2012 12:31:00 AM