Is Jesse Register union-busting to save a buck? 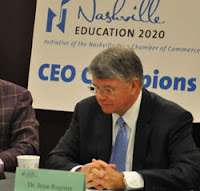 Metro Nashville Public Schools officials won't confirm or deny, but Nashville's service employees' union, SEIU, charges that MNPS Director Jesse Register has tried to convince service employees to quit the union. SEIU has filed a complaint with the School Board:


"This is not a dispute over wages, funding, or benefits," said Doug Collier, President of SEIU Local 205. "Last year, the state legislature passed laws which affected teachers' right to bargain collectively. Dr. Register is now trying to use those laws – which do not apply to school support employees - as an excuse to overreach his authority and silence the voices of thousands of loyal city employees who voted to form a union."

Didn't Register already overreach a couple of years ago by using private contractors as advisers for privatizing public service positions, outsourcing the jobs, and effectively cutting the labor force after many workers were not rehired by those contractors?
Posted by S-townMike at 1/17/2012 08:48:00 AM