The battle for clean alleys in Salemtown has been waged for months, enlisting the services of various Metro departments: Public Works, Streets and Roads, and Animal Control, to name a few.

One of the more effective responses to our call-to-arms has been MDHA, whom I contacted this past Monday about a local MDHA property, whose residents were merely pitching trash into the public alley as they didn't have a gate on the back fence. The other problem was that the MDHA property at the alley was so steeply inclined that the new tall trash carts could not easily stay in their upright and locked positions.

On Tuesday, I got a response from Jerry Seay, MDHA's Director of Housing Management, promising action. The slope was removed on Tuesday; a gate was put in by Wednesday, and the carts were replaced today.

Hats off to Mr. Seay and MDHA. Thanks for helping us keep our neighborhood clean. 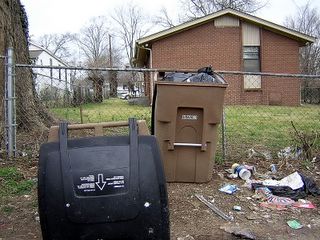 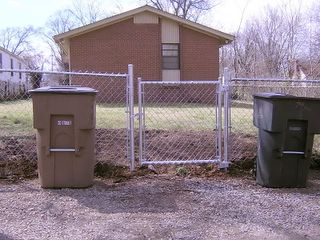