"The Plan of Nashville": Whose Plan? Which Nashville? Part IV

In this final response to The Plan of Nashville’s calls to replace I-65 with an urban boulevard, I want to examine MetroCenter’s holdings in North Salemtown. In particular, I want to consider whether there is any indication in the actual geography that MetroCenter is interested in neighborhood-friendly development. If there were such indicators, it would make the idea of doing away with the I-65 barrier more palatable. 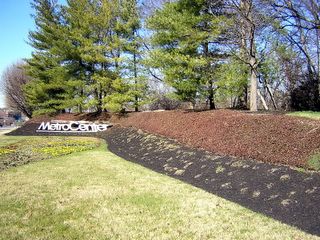 Half of the thin strip of land is landscaped with a steep, narrow grade and trees lining the crest: easy on the eyes of passing motorists on MetroCenter Blvd., but hard on houses if people were actually to live here. Moreover, if this were a gateway to an embryonic North Salemtown community rather than a commercial district, then quite logically, the industrial park-like “MetroCenter” sign would not be facing south at the tip of the northwest corner of Salemtown. The steep grade and the sign collectively encourage people to by-pass Salemtown altogether and to motor to the commercial offerings. 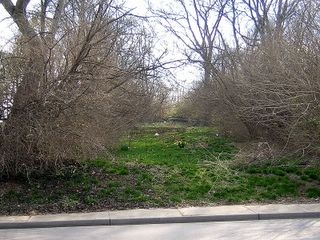 However, the properties as they currently stand south of Clay seem to be lying fallow, overgrown, and unkempt. If we gauge MetroCenter’s commitment to the well-being of the Salemtown neighborhood based on the quality of development of their residential properties, we come up empty. The MetroCenter Blvd. gateway to their commercial holdings with its dark-wood mulched flowerbeds, strategically placed pine trees, and gleaming metallic sign seems to be dramatically more developed and inviting, despite its total lack of viable space for people to actually live.
Posted by S-townMike at 3/11/2005 09:45:00 PM