Tomorrow night (March 15), Metro Council will have the second reading of a rash and reckless bill designed to prohibit single-family dwellings—like the one I live in—from having fenced front yards.

The bill has been sponsored and introduced by my own councilman, Ludye Wallace, and it would amend Metro Codes to read:

No fence shall extend beyond the front façade of any single-family or two-family structure. For purposes of this subsection, "front façade" means the front vertical face of a building that is substantially in one plane, has associated with it a primary entrance, and is composed from the following architectural components: exterior walls; columns or other vertical structural elements; windows; doors; roof edges; permanently roofed recesses; and arcades, balconies, or porches with permanent roofs supported by vertical structural supports.

I sent a letter to all Metro Council members this afternoon expressing my “fervent opposition” to the bill. We had planned to put up an attractive wooden picket fence, in keeping with the historical character of the north Nashville neighborhoods, in order primarily to provide a safe place for our toddler to play as she learns to walk and to run. We also support those, like Councilman Mike Jameson in East Nashville, who argue that this bill would “wreak havoc” with the historic nature of the neighborhoods.


This bill basically throws the baby out with the bathwater. It does not attempt to distinguish between effective and ineffective fences. Moreover, there seems to me to be more problems with the appearance of backyards and alleys than with front yard fences in Salemtown. The bill would do nothing about this deteriorating fence at the back of an overgrown lot in Mr. Wallace's district: 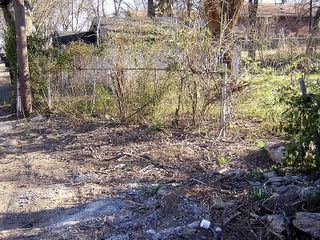 What an eyesore. What an embarrassment, even if it is not in front.
As ugly as the previous picture is, the front yard fence bill is even uglier as it would prohibit handsome old fences like the one in this picture: 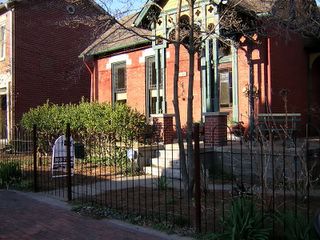 Another fence it would prohibit: 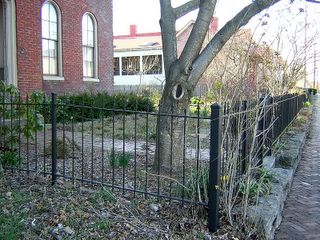 And it would do away fences like this wooden one, which not only defines the front property of the house, but also provides privacy from a next-door business: 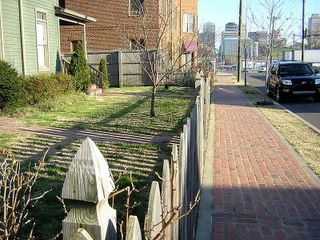 Given the current problems we have in Salemtown, I am amazed that our own councilman picked front yard fences to attack. I wish he would focus more on getting the gravel/dirt alley on my block paved or on dealing with gang-related graffiti in our neighborhood or on helping us reduce crime. Heck, I would have been tickled if he would have simply asked for my opinions and feedback when he started writing this lame prohibition against iconic picket fences.

Please contact Metro Council Members at councilmembers@nashville.gov or go to the Council meeting Tuesday night to oppose this bill!


03/15/2005 Update: During Tuesday's council meeting, Mr. Wallace reported that he had received a number of e-mails opposing the bill. He graciously moved to defer the bill indefinitely. Council voted in support of deferment.
Posted by S-townMike at 3/14/2005 11:30:00 PM