I highly recommend this article at the American Prospect on the domestic costs of a free society. Paul Starr's argument is consistent with what I maintained earlier today: that the federal government's expensive foreign policy blunders in Iraq are draining resources that could be invested in important domestic programs.

Starr points out that federal expenditures on education, science and technology, health, and programs for children are not a drain on wealth, but instead are forms of investment. And those programs have a demonstrable history of long-term payoffs.

The same might be said of the block grant program, which benefits local neighborhoods. Federal investment in urban areas spurs economic growth that accumulates and expands. Take a look at the BellSouth Building and its cumulative affects on the south downtown area over the years. The economic redevelopment of downtown stretches from its beginnings at the BellSouth Plaza in either direction on Broadway, to the GEC and to the Shelby St. Bridge; south to the SoBro district and north perhaps to the Court House currently under renovation.

I remember a meeting in the early 1990s that some of us organizers had with then MDHA Director Gerald Nicely. He told us that the BellSouth project received federal grant revenues in the form of a community block grant, which MDHA administered. Just look at the constructive ripple affect that well-placed federal funds can have on a neighborhood in one short decade. 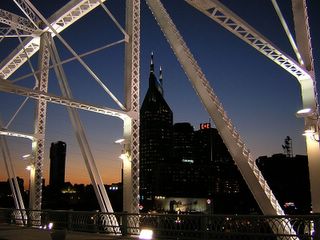 BellSouth ("Bat Man") Building in background from the Shelby St. Bridge at dusk. Photograph by S-townMike. Permission required for copy or reprint.