A neighbor asked that I post a piece on some dumped tires to Enclave. Happy to oblige.

On Thursday someone claiming to be the owner of the property at 1618 6th Ave., North dumped loads of tires twice on the vacant lot. When confronted by two residents, he claimed that the tires would be cleared out by today. As of this morning, when I drove by, they were still there. 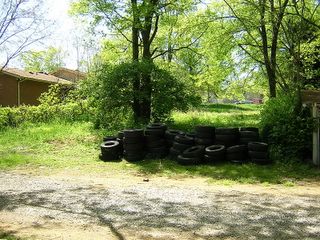 Old, used tires dumped at the back (alleyside) of 1618 6th Ave., North. Photograph by S-townMike.

The Tire Man told at least one resident that one local tire shop paid the Tire Man to get rid of their used tires rather than having to pay landfill fees. Why does a property owner need to unload used tires for extra money? Does this smell like a racket to anybody else but me?

Oh, and incidently, according to the Metro Planning Dept.'s online map room, if this Tire Man is the property owner, his name is Dorothy and she drives her beat-up old pick-up truck and tottering tire-filled trailer from the 37212 zip code in order to earn a few bucks making used tires disappear.

This is a new one on me. The odd thing about these properties is that subdividing the property only makes each sliver of land 25 ft. wide, pretty much guaranteeing that each will stay vacant. The tires remain exactly where the Tire Man dumped them. Neighbors filing complaints with Metro Codes seem to be getting the bureaucratic runaround.
Posted by S-townMike at 4/16/2005 10:31:00 PM