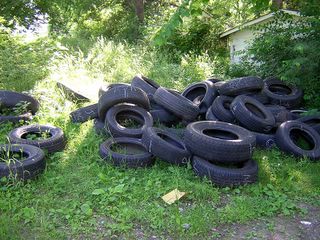 The Tire Dump on 6th Ave., North, living in infamy on Enclave and attaining fame on News Channel 2. Still standing as of yesterday evening, when this picture was taken. Photograph by S-townMike.

Has it already an entire month since those tires were dumped on the 6th Ave., North property, with promises they would be gone in two days? Yup. According to my calendar it's been a month and about a half a week. I guess time flies when nothing gets done.

Well, neighbors here have pursued various avenues trying to get this problem resolved. Several contacted Codes without getting help. One of the Police Officers in the Central Precinct personally sent a picture and a request for help to a Codes Inspector he knows. That did not get a response. A week after his attempt (April 29), I sent an e-mail to the same Inspector and CC'ed to the Mayor's Office. I also sent an e-mail to the Codes' Property Standards Chief, Bill Penn, but did not get the courtesy of a referral to someone else or even a brush off. I basically got to eat Codes's static, to consume their silence on this issue.

According to e-mails forwarded to me, Michelle Steele in the Mayor's Office of Neighborhoods forwarded my complaint to Brent Hager in the Metro Health Department on May 2. Mr. Hager immediately ordered an investigation. One of his staff members reported the same day that a "10 ten notice" was issued to the owner of the 1618 property on April 27, 2005 to cut excessive vegetation and to remove all tires that was dumped at the rear of property. That employee reported that a follow up would be made on or around May 12th. Mr. Hager wrote me that if the problem was not resolved by May 12, then a "court citation" would be issued.

I wrote Mr. Hager back and explained to him that, according to the Planning Department's map site, the tires did not sit on 1618, but on 1618 1. I suggested that they might be citing the wrong person. I copied that e-mail to Planning and asked for a confirmation or a correction to my interpretation of their maps. (Incidently, 1618 has been mowed since the April 27 notice; 1618 1 has tires and tall grass).

I never heard back from the Planning Department. I never heard back from Mr. Hager in Health. We are now six days out from the deadline after which a court citation was to be issued (quite possibly to the wrong property owner). Nobody has said a word; at least, not to me. And the tires are still there, providing a ready-made habitat for swarms of mosquitoes, which the Metro Health Department claims to want to target in order to avoid an outbreak of West Nile Disease.

Somebody in Metro better keep their eye on the ball. I'm already hearing from a couple of neighbors that the swarms of mosquitoes seem especially large and unbearable for us to be this early in the season.